Tomac’s fourth-consecutive win, which is the first time a rider has won four straight on the tour since 2017, was the 43rd of his career – putting him one win behind all-time SX 4th place wins racer Chad Reed (44 wins). In addition, Tomac’s 255 total points and 51-point lead in the overall 450 class standings is the largest margin over 2nd place – Jason Anderson (Monster Energy/Kawasaki) and Barcia, both at 204 points – following 11 rounds of racing through the past two decades.

“I’m liking the position we’re in,” said Tomac. “Thanks to the Monster Energy/Star Racing/Yamaha team.” 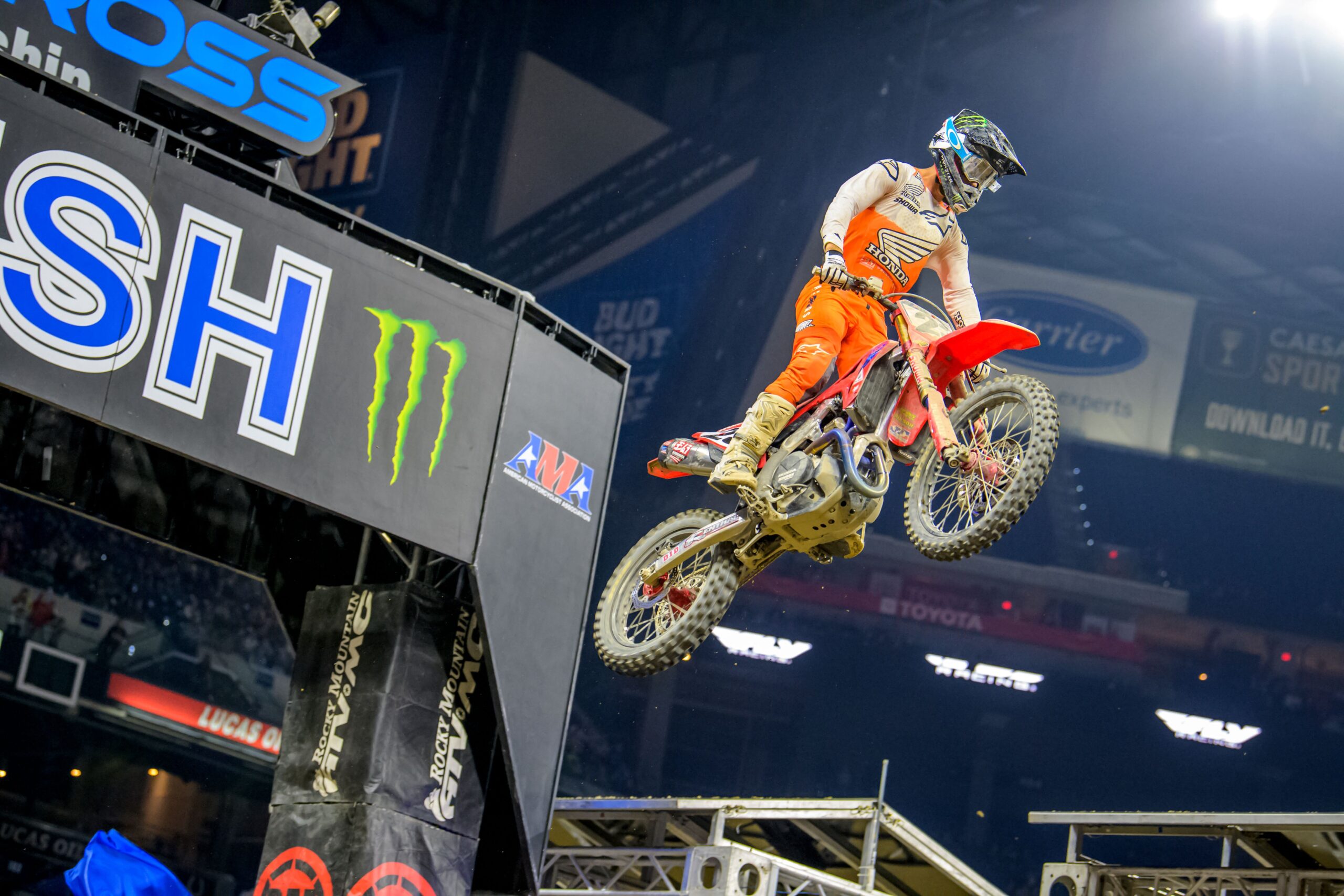 The top starting gate pick for Monster Energy racers would go to Anderson, who qualified in the No. 1 position (Sexton with the 3rd gate pic and Tomac selecting 6th). … Anderson got an excellent start, moving to 2nd place on the second turn while Tomac (4th) and Sexton (9th) were also in the top ten on the lead lap. … Tomac would be the first Monster Energy racer to move up, catching Stewart and easily getting into 3rd place. … At the 12:27 mark Anderson, who was shadowing race leader Barcia, would capitalize off an error from the leader and shoot into the lead. … Anderson, who’s tops in the class with 69 laps led this year, would only enjoy that lead for a few moments as Barcia came back – hard – colliding with Anderson and sending the Monster Energy/Kawasaki racer to the ground. … Tomac would inherit 2nd place following the Barcia/Anderson incident, while Sexton moved into the top five. … With just under five minutes remaining, and having shadowed Barcia for several laps, Tomac went railing by the Gas-Gas racer in a rhythm section, taking a high line through the ensuing bowl turn and hitting the power hard out of the turn – so that Barcia couldn’t direct his bike onto him (Tomac) as well. … Clear of Barcia, Tomac led the pack that also featured fellow Monster Energy racers Sexton (5th) and Anderson (7th). … A crash by Stewart in the whoops would give Sexton (4th) and Anderson (6th) each a spot as Tomac cruised to the win, albeit a bit sketchy in the final moments of the race.

Said Tomac: “It was shaky the last couple laps. Thankfully, I was in control before that. The second-to-last lap I had a big moment in the whoops. And that last one (lap) I missed that entire rhythm section. I’m like ‘Oh my gosh, I’m about to throw this away.’ It was a night of patience.” 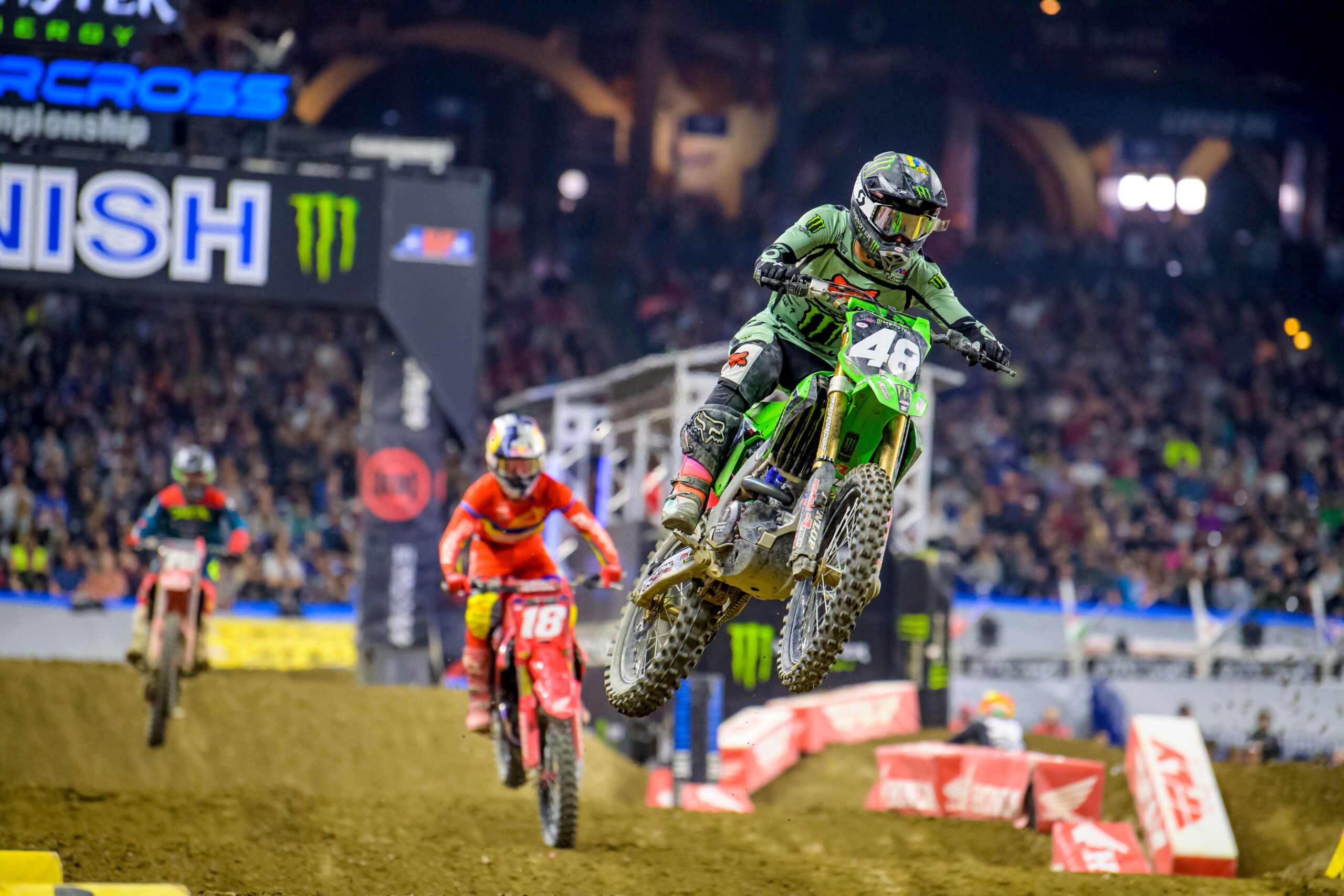 McAdoo, the No. 1 qualifier, took the starting position right next to the AMA’s doghouse, then bolted cleanly out of the start in 2nd position – right behind Lawrence. … At the 12:15 mark McAdoo was still in tight on Lawrence, a good sign, which allowed for a clean pass at the 11:30 mark. … “The roles are reversed now and the pressure is on Cameron McAdoo,” said race announcer Ricky Carmichael of McAdoo’s pass on Lawrence. … McAdoo would open up a .68 second lead, then extend it to more than a second with 9:50 to go in the contest. … With Chisholm holding solidly in 7th place, McAdoo pushed things up front – opening up a near two-second (1.97) lead on Lawrence. … The top two 250 ESX point leaders would soon run into lapped traffic and Lawrence took advantage of this, getting back past McAdoo in the whoop section and sealing the pass in the sand. … At the checkers it’d be McAdoo in a strong 2nd place, with Chisholm holding on to 7th.

Said McAdoo: “I’m kinda bummed, but I can’t act like I lost my dog up here. It’s definitely confidence-inspiring. I learned that I need to tighten things up in some areas. I missed a rhythm section after the whoops too many times. We’ll take a couple weeks, work hard, and maybe we can fight a little harder, a little longer next time.” 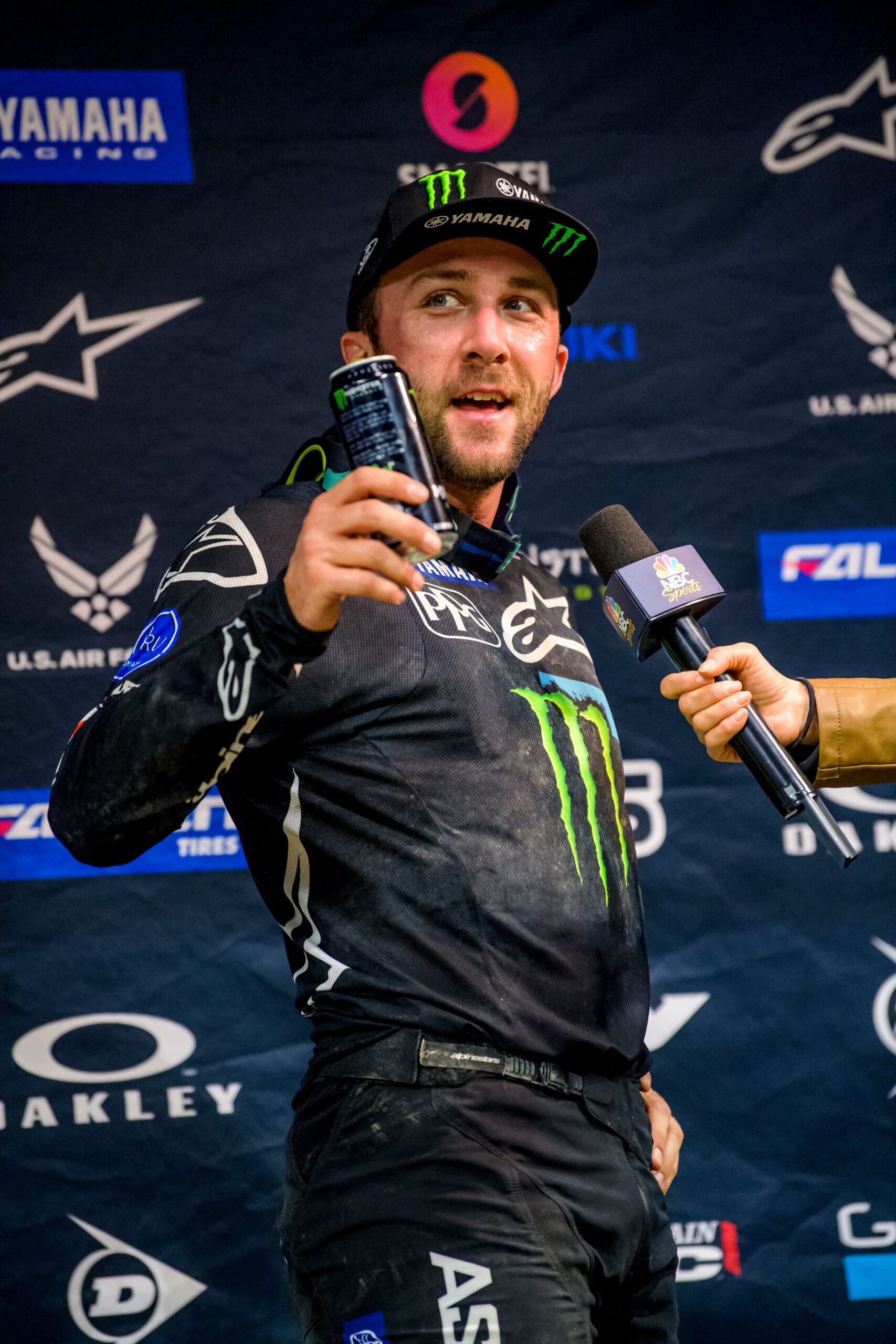 Round 12 of 2022 Monster Energy AMA Supercross will be at Seattle’s Lumen Field this Saturday, March 26th. More information can be found at www.supercrosslive.com

Some companies won’t let you have any gear unless you’re on the payroll. We’re all about our fans rockin’ the Monster Energy logo the way they want – on hats, shirts, MX bikes, trucks, gear, or even on themselves. Our idea of a promotion isn’t giving away a TV you already got. Our promos offer exclusive VIP access, insane trips hanging with top musicians and athletes, and real gear like dirt bikes, snowboards, and helmets.

In short, at Monster Energy all our guys walk the walk in action sports, punk rock music, partying, hangin’ with the girls, and living life on the edge. Monster Energy is way more than an energy drink. Led by our athletes, musicians, employees, distributors, and fans, Monster Energy is… A LIFESTYLE IN A CAN!

Eli Tomac Back to Winning Form in 450SX Class