Record Three Live Races and 13 Total Hours to Air on NBC in 2022; All 17 Races to be Presented Live Across NBC, CNBC, USA Network and Peacock

Peacock to Stream All 2022 Supercross Season Coverage, Including Race at Angel Stadium Exclusively on Feb. 12

NBC Sports’ 2022 Supercross race action begins with the season opener from Angel Stadium in Anaheim, Calif., live on Saturday, Jan. 8, at 10 p.m. ET on CNBC, marking a return to the state where the series has begun the season 24 of the past 25 years after beginning last season in Texas.

The 2022 season culminates with the season finale from Rice-Eccles Stadium in Salt Lake City, Utah, on Saturday, May 7, at 8 p.m. ET on CNBC, with an encore presentation airing on Sunday, May 8, at 1 p.m. ET on NBC.

Peacock exclusively streams a Supercross race for the first time in 2022 from Angel Stadium on Sat., Feb. 12. All Supercross heats, qualifiers and live and on-demand replays of races will be available on Peacock.

Veteran NBC Sports motorsports commentators Leigh Diffey and Todd Harris will handle play-by-play duties for Supercross coverage in 2022. They’ll be joined by five-time Supercross champion and seven-time premiere class Motocross champion Ricky Carmichael as analyst, and reporters Daniel Blair and Will Christien. Blair will serve as the play-by-play commentator for a select number of races.

Below is the complete 2022 Monster Energy Supercross telecast schedule: 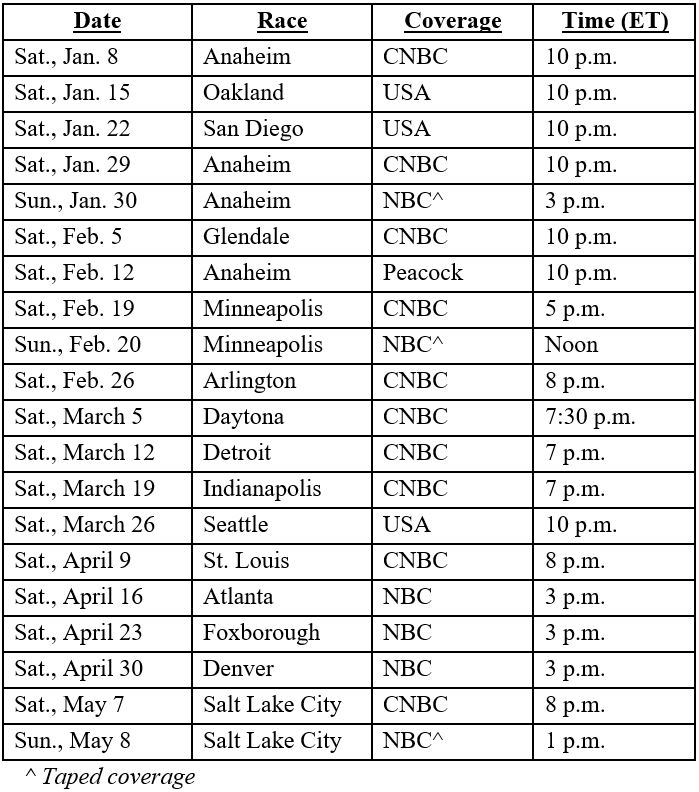 Supercross Video Pass and international streaming details of the 2022 Monster Energy AMA Supercross Championship will be forthcoming in December.

Monster Energy AMA Supercross is the most competitive and highest-profile off-road motorcycle racing championship on the planet. Founded in America and sanctioned by the American Motorcyclist Association (AMA) since 1974. Over 17 weeks and a million-dollar All-Star Race, Supercross attracts some of the largest and most impressive crowds inside the most recognizable and prestigious stadiums in North America to race in front of nearly one million live fans and broadcast to millions more worldwide. For more information, visit SupercrossLIVE.com.

Full Slate of Live Coverage On Deck for Season Opening Fox Raceway I National MORGANTOWN, WV – May 26, 2021 – (Motor Sports NewsWire) – In conjunction with its broadcast partners, NBC Sports Group and […]

Ralph Sheheen, Ricky Carmichael, Daniel Blair and Will Christien to Serve as NBC Sports’ Monster Energy Supercross Broadcast Team in 2019 Nearly 100 Hours of Supercross and Monster Jam Coverage to be Showcased on NBC, […]