BREA, CA – October 12, 2020 – (Motor Sports NewsWire) – Suzuki Motor of America, Inc., and Team Hammer reaped the rewards of a season’s worth of hard work with a highlight weekend of the 2020 MotoAmerica AMA/FIM North American Road Racing season to date at Indianapolis Motor Speedway. By the time the final checkered flag at the Brickyard had waved, the pairing had gained two national championships, three race victories, four pole positions, and six podiums.

The rider who grabbed that final checkered flag was M4 ECSTAR Suzuki’s Bobby Fong, who enjoyed perhaps the finest weekend of his decorated professional career. On a historic MotoAmerica Superbike tripleheader weekend, Fong took a narrow victory in the Saturday’s race aboard his Suzuki GSX-R1000, backed it up with a close second in Sunday’s first race, and then pulled off a dominant, runaway win in the day’s concluding contest.

“It’s great to be back up here,” Fong said after his Sunday triumph. “It’s been a long season and my M4 ECSTAR Suzuki is finally coming into its own. I didn’t really have a gameplan coming into the final race, but my coach, Josh Hayes, said I just had to be relentless out there. I just plugged away and put in my laps.”

Fong consistently performed his best despite a large number of obstacles, including several red flags as well as competitors crashing near him. Fong avoided trouble throughout yet ran a strong race pace that was tough to match. The Californian now has three Superbike victories this season to go with the Supersport crown he won last year while mounted on a Suzuki GSX-R.

“The bike was awesome,” he added. “Big kudos to everyone on the team. They’ve been supporting me all year long, and I can’t thank them enough for all they’ve done.”

His premier-class teammate, Toni Elias, was in outstanding form in Indy as well, powering to pole position aboard his M4 ECSTAR Suzuki GSX-R1000. Elias’ results were dampened by some misfortune — a red flag was shown while he was running second on Saturday and he crashed out of the lead as he and Fong were pulling clear early in Sunday’s second race – but he still managed to net a pair of top fives (fourth and fifth) on the weekend.

The Indy weekend also saw SportbikeTrackGear.com Suzuki’s Rocco Landers and Altus Motorsports Suzuki’s Cam Petersen wrap up their respective Twins Cup and Stock 1000 championships a full round early aboard their Team Hammer-built Suzuki racebikes. Landers pulled another disappearing act in Twins Cup action to register his seventh win in succession aboard his Suzuki SV650, clinching his title campaign in style. Petersen appeared to do the same aboard his Stock 1000-spec GSX-R1000, however, his seventh win in a row was later relegated to a runner-up finish when he was docked 0.4 of a second due to a sporting infraction.

15-year-old Landers said, “SportbikeTrackGear.com and Team Hammer have put this amazing program behind me all year. After Road America and Atlanta, I didn’t think I was going to be up here. The results early in the year messed with my head a little bit, but I’m feeling so good now. I’ve been feeling so good most of the year. It’s been so awesome working with this whole team. They’ve worked so hard for me and given me such an amazing bike.” 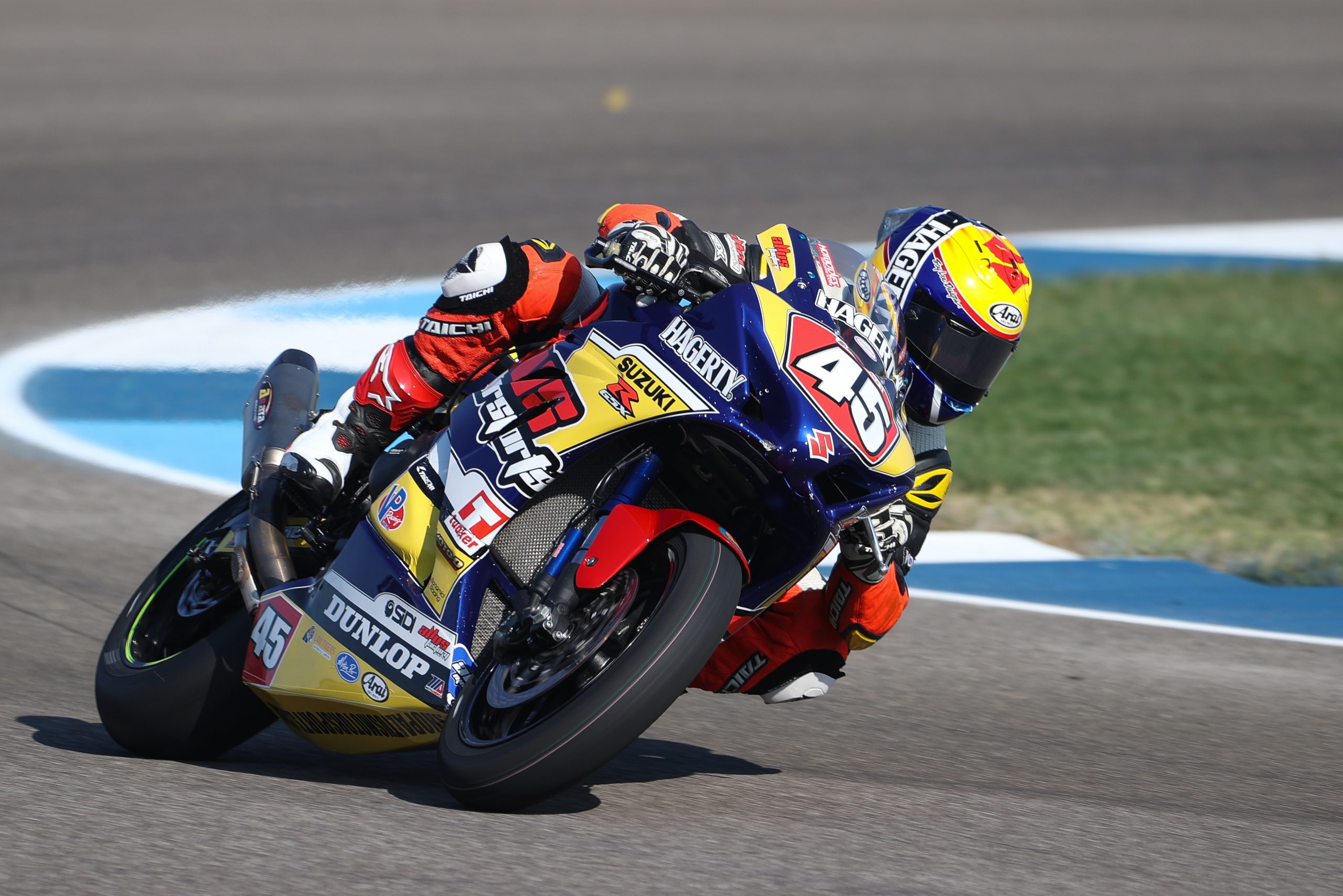 After winning the Stock 1000 championship, South African Petersen said, “I’m a little bit lost for words. It means a lot to me. I’ve been working for this my whole life. To be able to hold up an AMA #1 plate is pretty special. I’m so happy. I’ve got to thank the whole team for all their work and giving me a machine I can win on every weekend.” 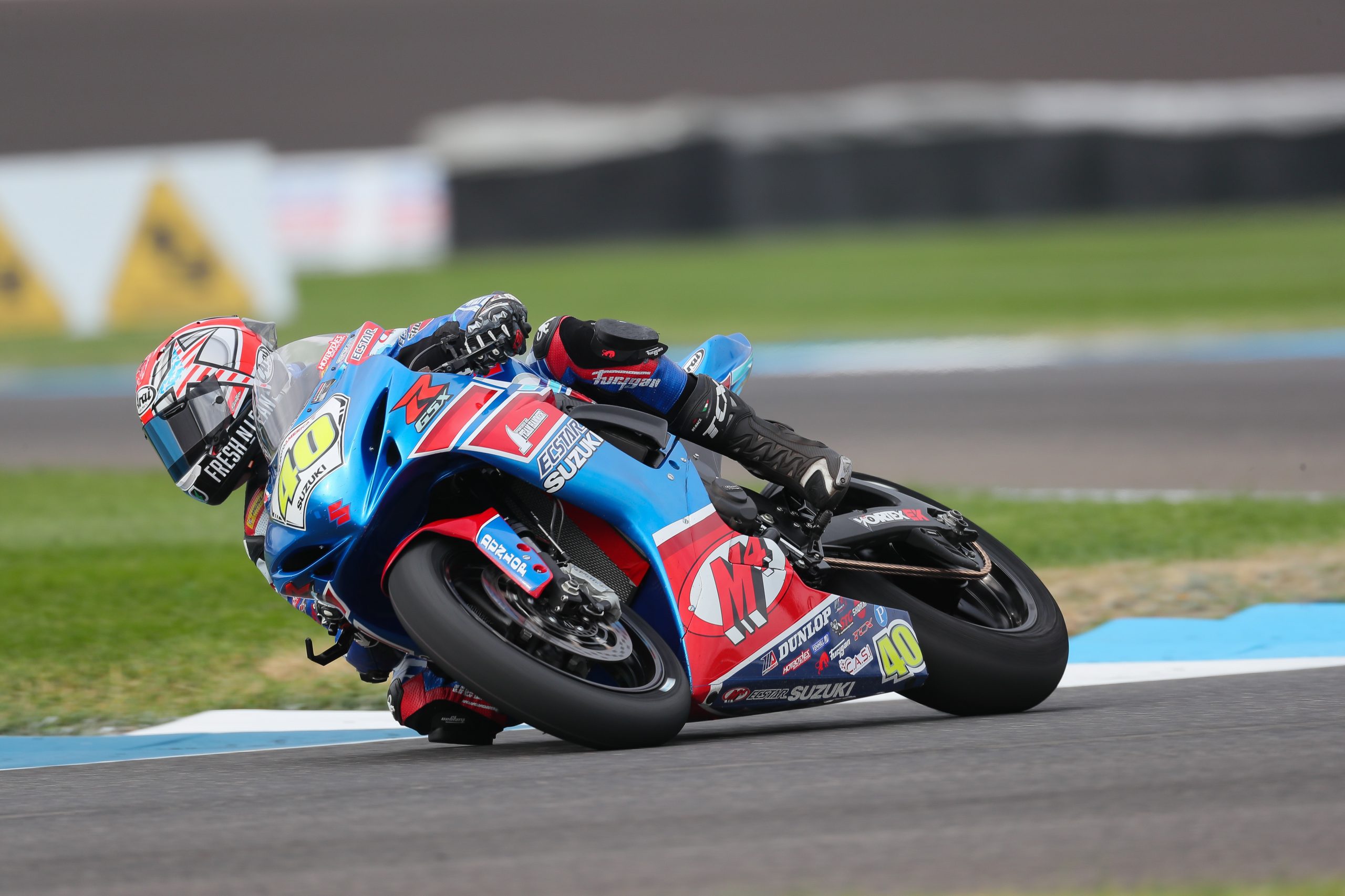 Meanwhile, M4 ECSTAR Suzuki’s MotoAmerica Supersport duo of Sean Dylan Kelly and Lucas Silva showcased their skills as well. Kelly earned the pole aboard his GSX-R600, but made a small mistake on Saturday while leading in a ‘must win’ effort to keep his title hopes alive. He bounced back from the fall to finish as the Supersport runner-up on Sunday. 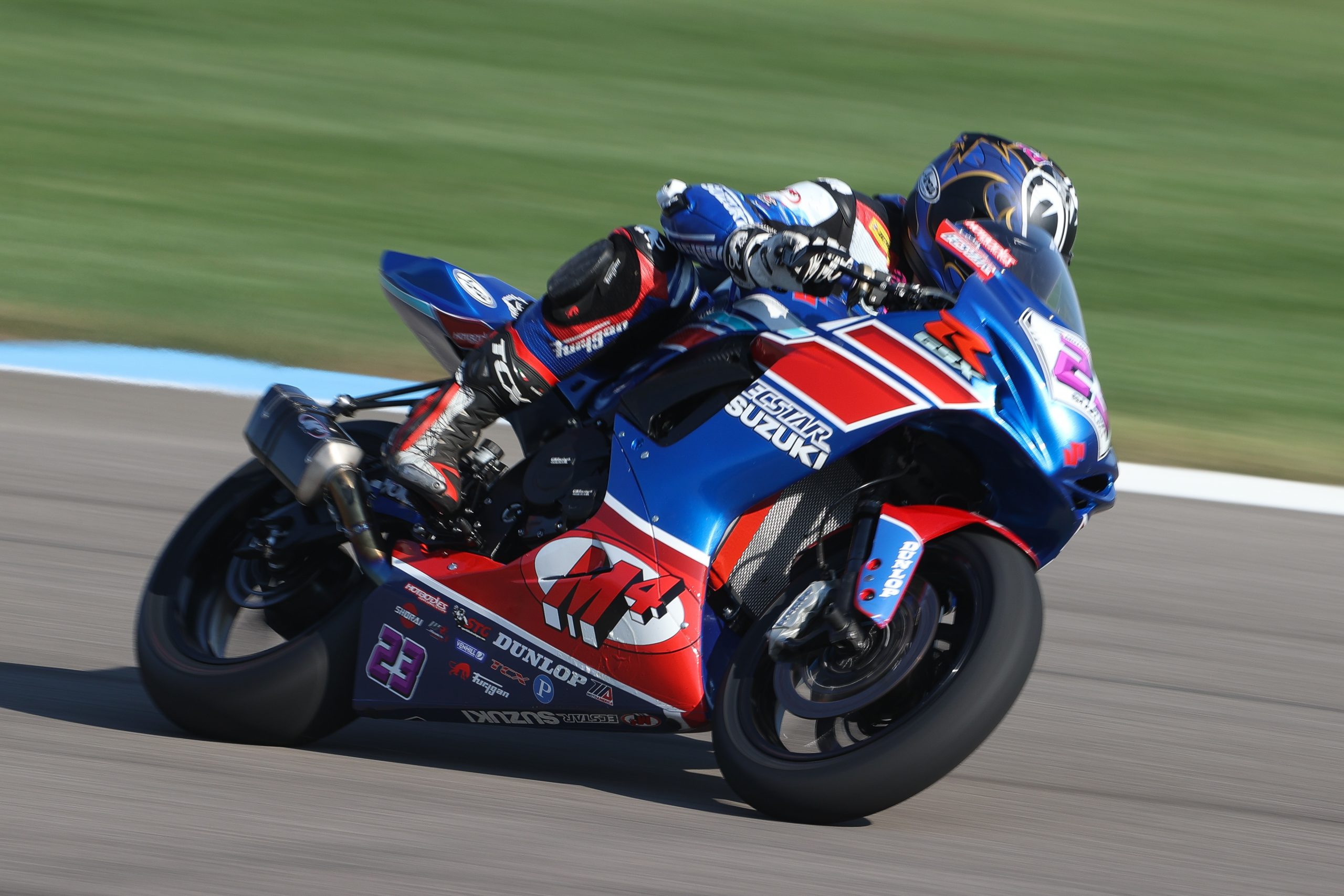 Silva, meanwhile, battled for the podium on Saturday, running in second position until he was pushed wide on the final lap and ultimately came home in fourth. He followed that up with a sixth on Sunday to keep his season-long run of top tens alive.

Team Hammer and American Suzuki will look to continue its hot form and close out the 2020 season in a flourish at the 2020 MotoAmerica season finale, which will take place at WeatherTech Raceway Laguna Seca in Monterey, California, on October 23-25.

Beaubier Rules Race One At VIR

Elias Gets His First Pole Of The Season At Indy

A New Lap Record For The Spaniard At The Brickyard INDIANAPOLIS, IN – October 10, 2020 – (Motor Sports NewsWire) – Cautiously optimistic is the best way to describe Toni Elias’ mindset after the Spaniard […]