MORGANTOWN, WV – July 29, 2021 – (Motor Sports NewsWire) – As the 40th Annual Monster Energy AMA Amateur National Motocross Championship draws nearer, MX Sports is pleased to welcome back a host of returning sponsors to the historic Loretta Lynn Ranch in Hurricane Mills, Tennessee. The biggest companies throughout the industry, along with top names in amateur racing, continue to join forces with the world’s largest and most prestigious amateur motocross event in the world.

Monster Energy makes its return as the title sponsor of the AMA Amateur National Motocross Championship. Monster Energy will once again be awarding National Champions with a one-of-a-kind trophy. Monster Energy continues to show a remarkable amount of backing to the motorsports industry, along with their athletes and fans alike. The Monster Army was then created to encourage the next generation of professional racers, the future Jeremy McGrath, Ricky Carmichael, Eli Tomac and Aaron Plessinger’s of the moto world. 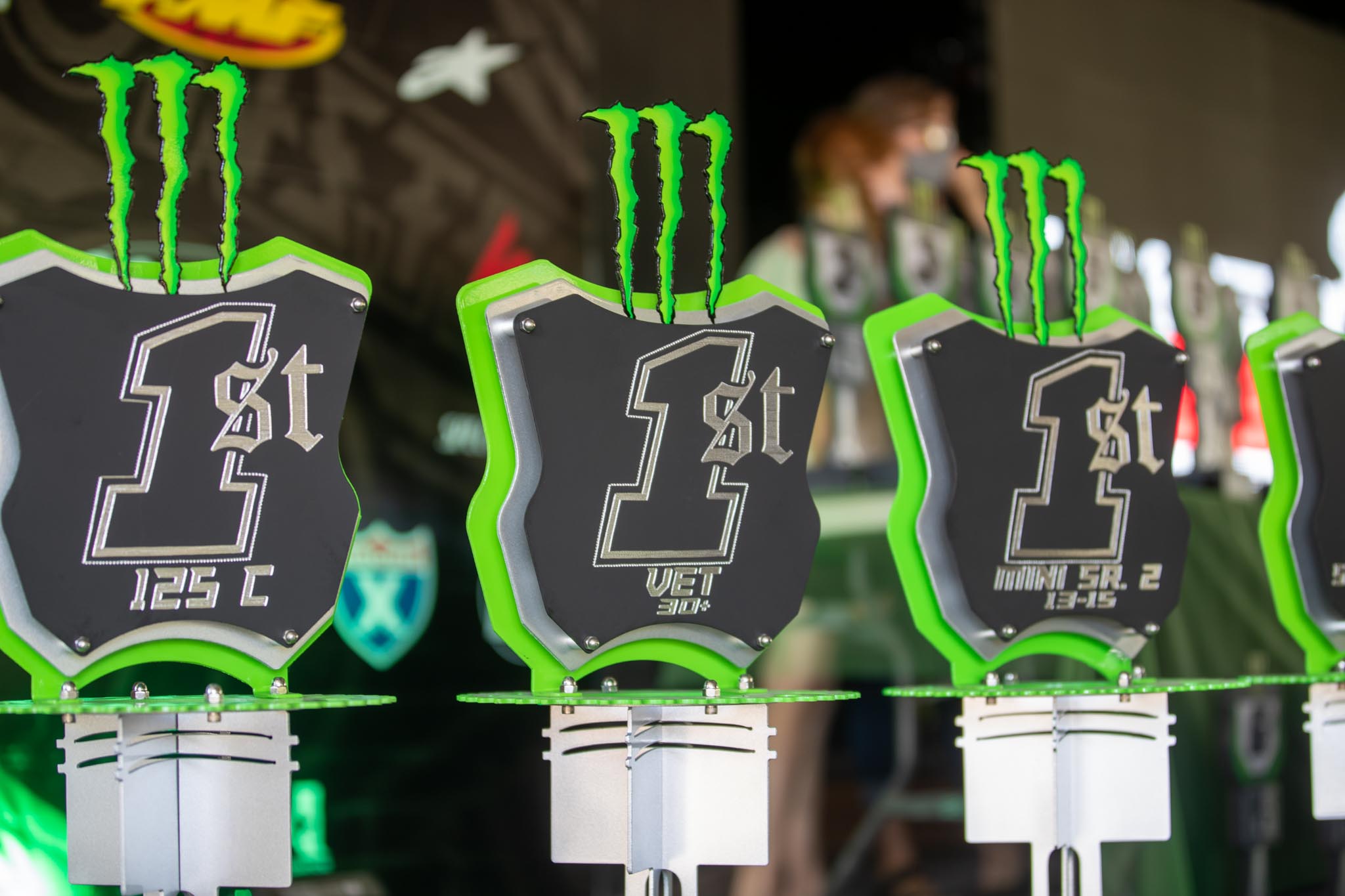 Monster Energy returns as the title sponsor of the 2021 event, also returning will be the one-of-a-kind National Champion trophies. Photo: Derek Garcia

The Parts Unlimited and Thor teams continue to show their tremendous support of the AMA Amateur National and will look to host various activities, giveaways and hospitality for Thor racers and their families throughout the duration of the week.

Continuing to show their support with the Race Gas Program is Rocky Mountain ATV/MC. Riders participating at Area Qualifiers and Regional Championships would have earned $10 and $20 Race Gas Credit, and now National Racers will also see another $20 credit in their account on RockyMountainATVMC.com. Through this program last year, Rocky Mountain ATV/MC contributed to putting over $400,000 back in the hands of amateur racers during one of the toughest times.

Polisport continues as the official plastic and track markers of the AMA Amateur National Motocross Championship. Providing track markers, which is one of the most important tools in creating a National-level track, will help guide the racers through the bumps, ruts and turns at Loretta Lynn’s Ranch.

MX vs. ATV All Out remains an official sponsor of the amateur national for the 2021 event. After 2020 and the Loretta Lynn MX vs. ATV Online Championship during quarantine the franchise continues to be a pioneer in the off-road racing video game industry.

ARMA Sport continues their support into 2021 as an official sponsor. ARMA’s mission has always been to provide the highest quality products to athletes to help them focus, gain strength and endurance while also speeding up their recovery time. ARMA’s presence will be felt mostly in the cool-down zone where coolers will be stocked with ARMA Sport products.

STACYC Inc. continues their efforts at the amateur national as the title sponsor of Camp Loretta’s for 2021 as well as supporting the coveted race holeshot awards. As 108 gate drops are scheduled for 2021, STACYC will be giving out certificates for those lucky enough to grab one. STACYC will also host a STACYC Jam Fest at the pump track on Tuesday, August 3, at 7:30 p.m. CT. 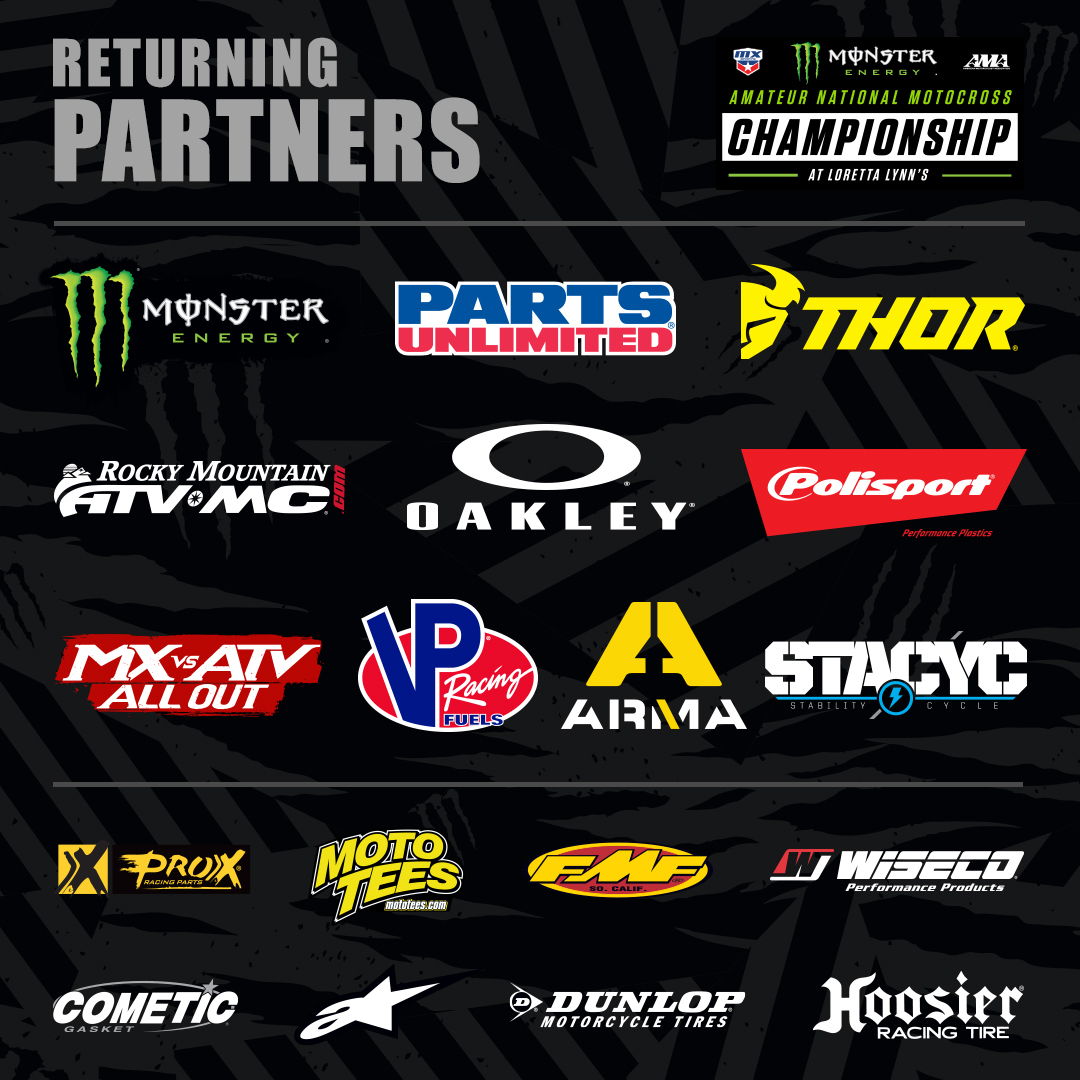 Alongside the National Championship’s Feature Sponsors are a handful of Associate Sponsors we are thrilled to welcome back to the Ranch including: ProX Racing Parts, MotoTees, FMF, Wiseco, Cometic, Alpinestars, Dunlop Motorcycle Tires and Hoosier Racing Tire.

Furthermore, we want to welcome back our Media Partners: RacerTV.com, Racer X Illustrated, Mad Moose Media, DMXS, MotoPlayground, VurbMoto, MAVTV and On-Track School. These partners continue to put our event on the National media scale with continued support of the Regionals and National Championship.

For more information on the Monster Energy AMA Amateur National, visit the official series website at www.mxsports.com or call (304) 284-0101. Join the conversation on the event’s social media channels, along with receiving the most up-to-date news and exclusive content.

The Monster Energy AMA Amateur National Motocross Championship is the world’s largest and most prestigious amateur motocross racing program. The national qualifying program will consist of 51 Area Qualifiers (February through May) and 18 Regional Championships (May through June), hosted at select motocross facilities across the country. The qualifying system culminates in the National Final (first week in August) hosted annually since 1982 at the home of country music star Loretta Lynn in Hurricane Mills, Tenn. Christened “The World’s Greatest Motocross Vacation”, the National event serves as a launch pad for some of the biggest names in professional motocross and supercross, including Ricky Carmichael, James Stewart, Ryan Villopoto, and Ryan Dungey. The national program is produced by MX Sports, Inc., a West Virginia-based race production company and is sanctioned by the American Motorcyclist Association (AMA). For more information, visit www.mxsports.com.

Founded in 1924, the AMA is a not-for-profit member-based association whose mission is to promote the motorcycle lifestyle and protect the future of motorcycling. As the world’s largest motorcycling rights and event sanctioning organization, the AMA advocates for riders’ interests at all levels of government and sanctions thousands of competition and recreational events every year. The AMA also provides money-saving discounts on products and services for its members. Through the AMA Motorcycle Hall of Fame in Pickerington, Ohio, the AMA honors the heroes and heritage of motorcycling. For more information, visit www.americanmotorcyclist.com. Not a member? Join the AMA today: www.americanmotorcyclist.com/membership/join.