MORGANTOWN, WV – May 4, 2021 – (Motor Sports NewsWire) – After a highly competitive and exciting trio of title fights, MX Sports Pro Racing would like to congratulate the newly crowned 2021 FIM/AMA Supercross Championship titleholders and praise the staff at Feld Entertainment for a successful season in the midst of ongoing uncertainty. Now, the industry shifts its focus towards the upcoming Lucas Oil Pro Motocross Championship, sanctioned by AMA Pro Racing, which will kick off in a matter of weeks, on May 29, with the Fox Raceway I National from Fox Raceway in Pala, California.

“The veteran leadership at Feld Entertainment should be celebrated for their ability to successfully finish two championship seasons in the midst of the pandemic,” said Roy Janson, Managing Director at MX Sports Pro Racing. “They kept the safety and well-being of both fans and participants at the forefront of organizing each schedule and, as a result, developed unique methods to ensure the completion of 17 rounds. Above all, they did this without sacrificing the quality of the competition on the racetrack.”

At the final round of the season this past Saturday from Salt Lake City’s Rice-Eccles Stadium, Red Bull KTM Factory Racing’s Cooper Webb wrapped up his second 450SX Class title in three years. The 2019 champion clinched World Championship number two on a high note with his eighth main event win of the season. In the two 250SX Class regional championships, a pair of first-time titleholders emerged from the Monster Energy/Star/Yamaha Racing effort. In the East Region, Colt Nichols overcame years of hardship to earn his first championship in his seventh season of competition, while Justin Cooper finally prevailed in the West Region after back-to-back runner-up finishes. The sweep by Star Yamaha signified the first time since 2012 that a team won both 250SX Class titles.

With their attention now directed towards the summer, Webb, Cooper, and Nichols will each look to carry their championship momentum into Pro Motocross and build upon their previous successes at the Nationals. Although he was forced to sit out the majority of last season with a back injury, Webb is a former 250 Class Champion and has a 450 Class win to his credit in Pro Motocross. Moreover, his trademark tenacity could pay big dividends over the course of the summer’s 24 motos. 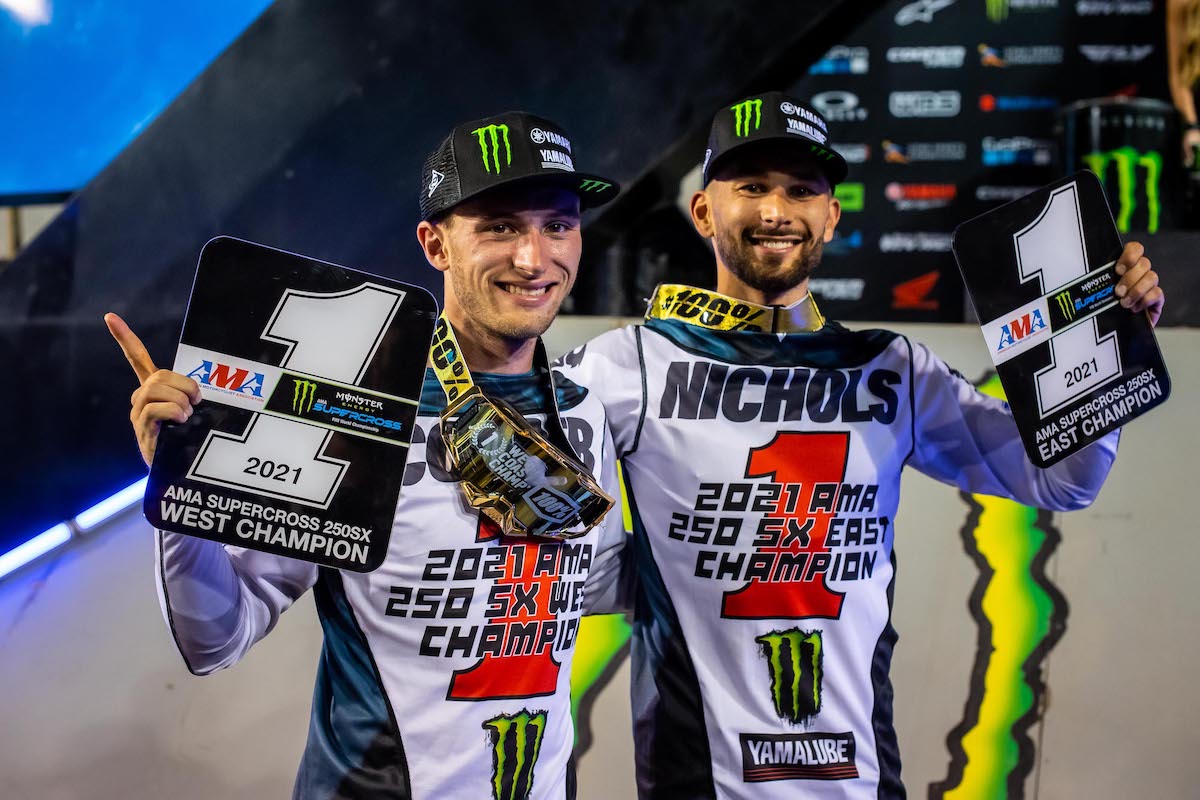 Entering his fourth season in the 250 Class, Cooper has become a perennial title contender, finishing no worse than third in the final standings. As a two-time winner with 14 podium finishes, Cooper is undoubtedly one of the championship favorites this summer and has now proven he has what it takes to break through. For Nichols, a career resurgence looks poised to continue this summer. Health has arguably been Nichols’ biggest obstacle to success and although he’s completed just one 12-round season of Pro Motocross since 2016, Nichols is a two-time podium finisher and is currently riding at the highest level of his career.

“The champions that emerged from this season of supercross are all destined to be formidable contenders this summer. Cooper Webb, Justin Cooper, and Colt Nichols have all the tools to be winners in Pro Motocross and we shouldn’t be surprised if their names continue to be mentioned for the next three months,” said Davey Coombs, President of MX Sports Pro Racing. “We also should recognize how many different riders captured a victory during the supercross season as it could be a precursor to some exceptional parity across both the 450 Class and 250 Class as we look to crown a pair of AMA National Champions in September.”

The 2021 Lucas Oil Pro Motocross Championship will once again consist of a 12-round schedule, beginning on Memorial Day Weekend with the season-opening Fox Raceway I National. The summer season will bring the world’s best riders to 10 different states, including returns to many of American motocross’ most iconic venues, concluding on September 11 with the sport’s oldest event, the Hangtown Motocross Classic in Sacramento, California.

Capps, B. Force, Anderson and M. Smith All Qualify No.1 at Lucas Oil NHRA Winternationals