MATTIGHOFEN, AUSTRIA – November 1, 2021 – (Motor Sports NewsWire) – Riding to a second-place finish at GetzenRodeo, the eighth and final round of the inaugural FIM Hard Enduro World Championship, Rockstar Energy Husqvarna Factory Racing’s Billy Bolt won the series title. Following a year-long battle with his closest rival Manuel Lettenbichler, Bolt did exactly what was needed at the German extreme race to ultimately tie on points in the final series standings, clinching the championship by virtue of having a higher number of second-place finishes earned throughout the year.

The action at GetzenRodeo was intense. A morning qualifying race saw Bolt and Lettenbichler swap positions at the front for the entire two hours, with Lettenbichler claiming the win by just three-tenths of a second. Going into the afternoon’s final, Bolt knew a runner-up result would secure him the series victory and guarantee his name would go into the history books as the first ever FIM Hard Enduro World Champion.

With the two young riders swapping the lead for the first few laps, Bolt made an uncharacteristic mistake, losing time on his rival and falling back into the clutches of the chasing pack. Struggling to regain his rhythm, the British rider dropped as low as sixth – a position that would have ruled him out of championship contention. However, refocusing and confident that he had the speed to get back to the front, Bolt began to pick his way through his opponents and was soon in second place, chasing down Lettenbichler. 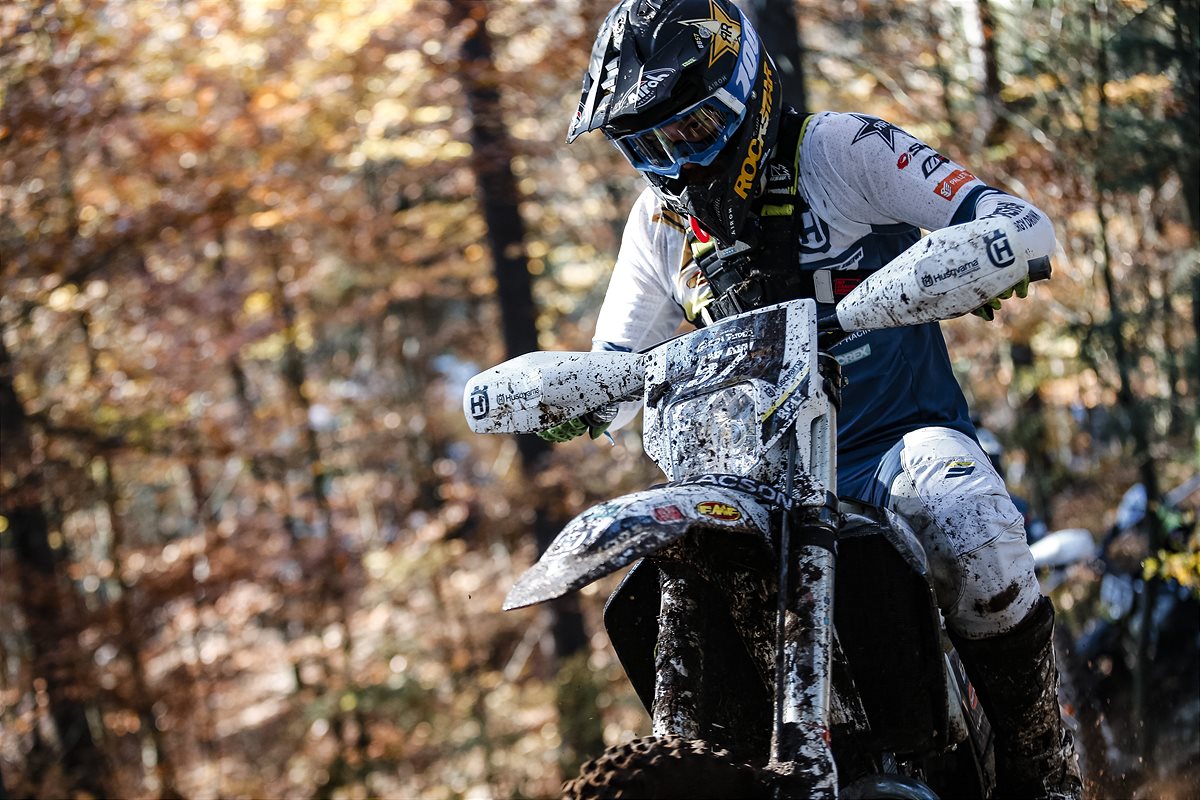 Despite reducing the gap to the leader to under one minute, Billy ultimately crossed the line in second place – enough to top the series standings and become the 2021 FIM Hard Enduro World Champion.

Although Bolt’s performance under pressure at GetzenRodeo was nothing short of incredible, his world title is a result of a hugely successful, and consistent season that has seen the 24-year-old claim three victories and finish on the podium at all but one round of the championship.

Making a big impression at Extreme XL Lagares, the opening round of the series, and despite the shortened race not awarding championship points, Bolt threw down the gauntlet to his rivals and showed he meant business in 2021. At Abestone Hard Enduro, he took his TE 300i to the top of the timesheets on each of the three days of racing, cementing his position as one of the main championship contenders.

Narrowly missing the podium at Romaniacs with a fourth-place finish, Billy bounced back in style, taking a huge victory at the Tennessee Knock Out, despite the added challenge of American racers hungry for success on their home turf. Two further second-place finishes, earned at the HERO Challenge and Hixpania Hard Enduro, gave Bolt a three-point advantage going into main rival Lettenbichler’s home race in Germany, and the rest is history!

Now, with the Hard Enduro Championship concluded for 2021, Billy immediately looks ahead to the opening round of the 2022 FIM SuperEnduro World Championship, where he will be aiming to defend his 2020 title at the five-round indoor series. 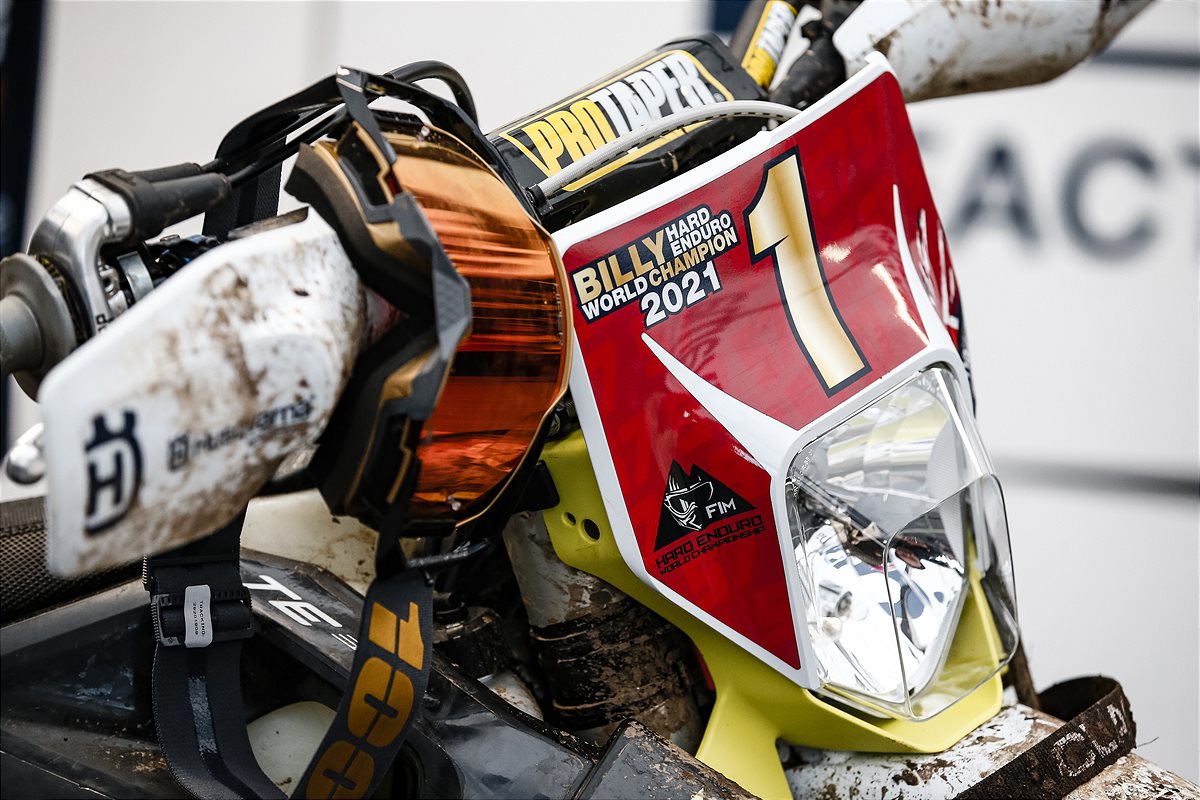 Billy Bolt – 2021 FIM Hard Enduro World Champion: “World Champions! What an amazing feeling it is. It’s going to take a while to process this one. I can’t believe I’m the FIM Hard Enduro World Champion. It was a hell of a race today. We all knew what we had to do, and we made it happen. I rode great this morning in the qualifier, but I hurt my finger. I was struggling a little with that in the beginning of the afternoon race and made a lot of mistakes early on. But I settled myself, regrouped and recovered. When I got back up to second, I closed the gap to Mani to one minute, but didn’t want to risk anything. Riding into the finish line as the world champion was such an amazing moment. It’s been a great year and I can’t thank all of the team enough for their support. We did it!”

Andi Hölzl – Rockstar Energy Husqvarna Factory Racing Team Manager: “We’re super happy and proud of Billy that he managed himself so well to get the title this year – the first FIM Hard Enduro World Champion in the books. He showed amazing skills throughout the season and a level of maturity worthy of a champion. The fight for the title this year has been so intense, and both Billy and Mani have definitely taken the discipline to a new level. It’s exciting for the team, they have worked so hard all season, but also for the sport in general – it’s really put hard enduro on the map globally. Hopefully we can continue like this next year!”

Husqvarna Motorcycles is widely known for leading innovation and providing exceptional performance across its street and offroad products, as well as being present in all top-level racing disciplines. With the brand originally founded in Sweden in 1903, Husqvarna Motorcycles’ machines have been designed and manufactured in Mattighofen, Austria since 2013.

Top Five for Bolt and Gomez at Romaniacs 2018