In a carbon copy of his three other victories, Gagne led from pole position and was never headed. He was the only rider to lap in the 2:11s and pulled away to what was ultimately a 5.987-second victory.

When we brought this Yamaha off the truck on Friday it felt really, really good,” Gagne said. “This track is just unique. I knew these guys were going to go. When you get to a race here at this track, we’ve got these long straightaways and people can make up time. It’s one thing doing it in practice, but these guys will step it up in the race. My first couple laps were really, really solid. Didn’t want to make any mistakes. Just tried to be smooth, be easy on these tires. Just kind of barely creeped away. It wasn’t much. It wasn’t like VIR. These guys were on my toes. I could see a couple of those spots you can see the big TV and you see those blue bikes and the red bike battling around. Hats off to the crew. They keep working, working, working no matter how fast we are. Even if we’ve got a little gap, they keep working and we keep going faster and that’s the plan. I think we learned a lot even today. I think we can try to brush some things up tomorrow because these boys are going to be coming.”

The battle for second was a good one with Warhorse HSBK Racing Ducati New York’s Loris Baz storming through in the last few laps to go from fourth to second, passing both M4 ECSTAR Suzukis to finish behind Gagne after making dramatic changes to his Ducati Panigale V4 R prior to the race.

“We changed the bike a lot,” Baz said. “Every session I would go out with a completely different bike. In race one, we changed the swingarm more than once just 20 minutes before the race because we got a lot of data. We tried a lot of things. That bike never rode actually with the Dunlop tire. We have to find the setup and work with the style. I was struggling all weekend. Finally, I trust my guys. The early laps it was really hard because when you go with a new bike and everyone is pushing hard, I was just slow. Then I took pace. I saw Cam (Petersen) was really fast coming on Bobby (Fong) and I just hope that he overtake him really soon so I can come back, and (this) is exactly what happened. Going into the last lap, I managed to overtake Bobby before the finish line. So, I said, ‘okay.’ I just tried to stay with Cam, but it was hard because also Bobby was just behind. In the last corner, I just wanted to open the line to have a good drive, but I had to close the door for Bobby. It was tough. But we’re getting there step by step. It’s really hard getting to try so many things in such a small amount of time, but that’s our challenge. Congrats to Cam. Hats off to Jake. We have to work really hard to catch him. Massive thanks to all the team. That one goes to Jason (Dupasquier, who passed away from injuries suffered in a qualifying crash for the Italian Moto3 Grand Prix).”

Baz passed both Bobby Fong and Cameron Petersen on the run to the flag with just .073 of a second covering the three-rider battle for second. Petersen held on for third for his first MotoAmerica Superbike podium with his teammate Fong a shadow fourth.

“I’m super happy,” Petersen said. “Obviously, I’ve been working for this for a long time. I’ve had a few opportunities at it, and it never seems to go my way. So, to finally get one it feels so, so good. I kind of keep going on about it, but this one’s for my family. They sacrificed everything. So, this one goes out to my dad, my mom, my sister, my fiancé. They’ve sacrificed pretty much everything for me to get to this point, so this one’s for them.”

Some eight seconds behind the battle for second, the battle for fifth was settled at the line with Gagne’s teammate Josh Herrin barely besting Westby Racing’s Mathew Scholtz for the spot.

Another some 11 seconds behind came a tussle for seventh that went to Panera Bread Ducati’s Kyle Wyman over Scheibe Racing BMW’s Hector Barbera, the Spaniard ending up eighth in his Road America debut.

With his third win in four races, Gagne leads the championship by nine points over Scholtz, 100-91. Herrin is third with 72 points, 10 points clear of Petersen’s 62. Fong is fifth with 59 points.

To purchase tickets for any of the 2021 series round, click HERE

For information on how to watch the 2021 MotoAmerica Series, click HERE 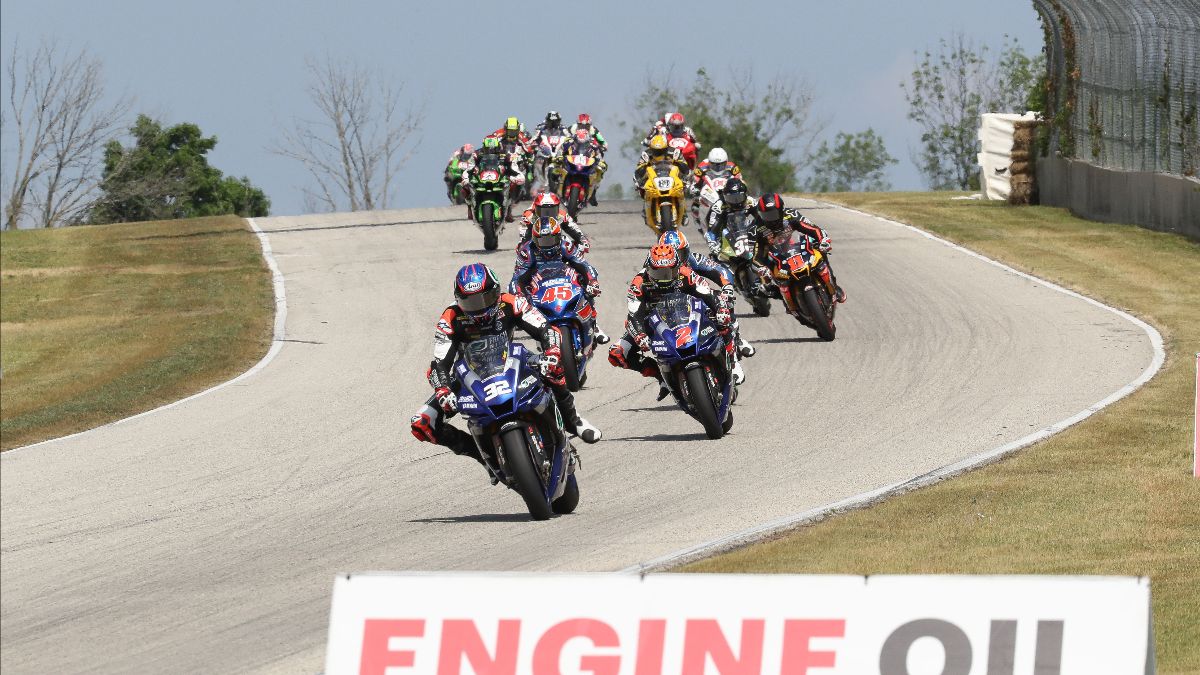 Jake Gagne (32) leads his teammate Josh Herrin (2), Cameron Petersen (45) and the rest of the HONOS Superbike class at the start of Saturday’s race one. Photo by Brian J. Nelson 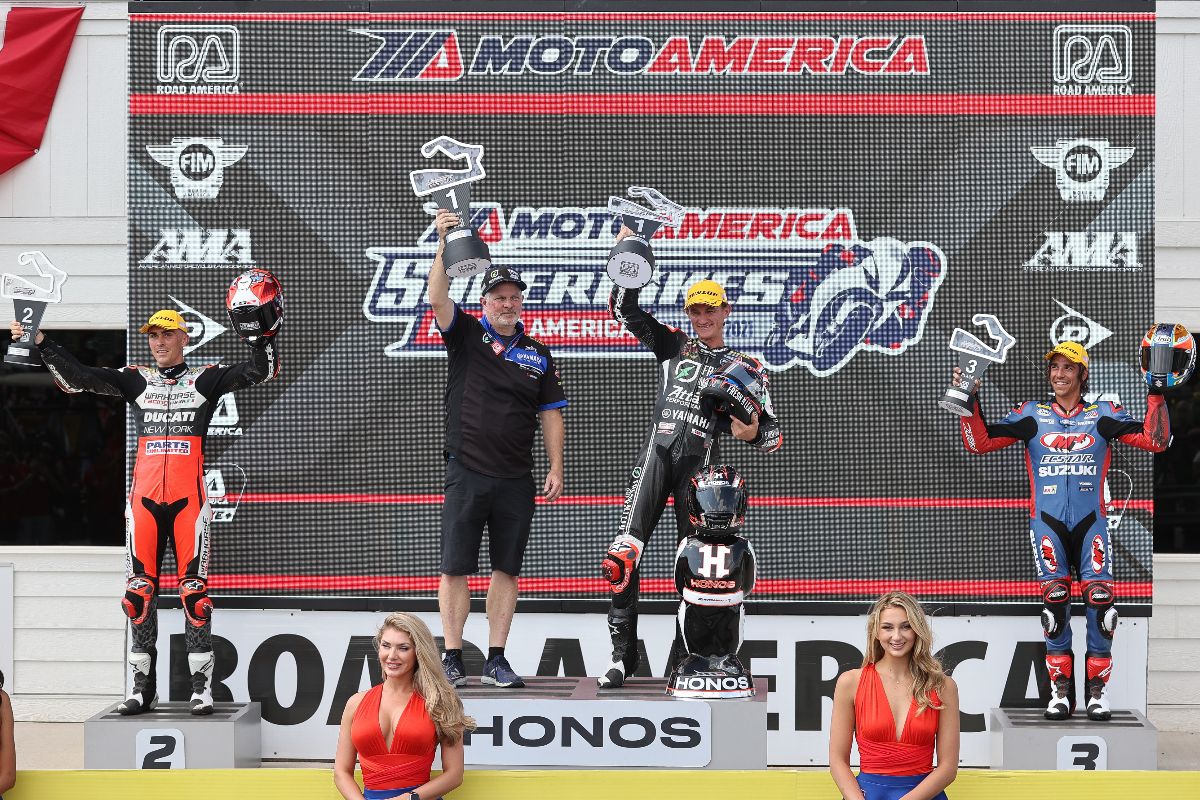 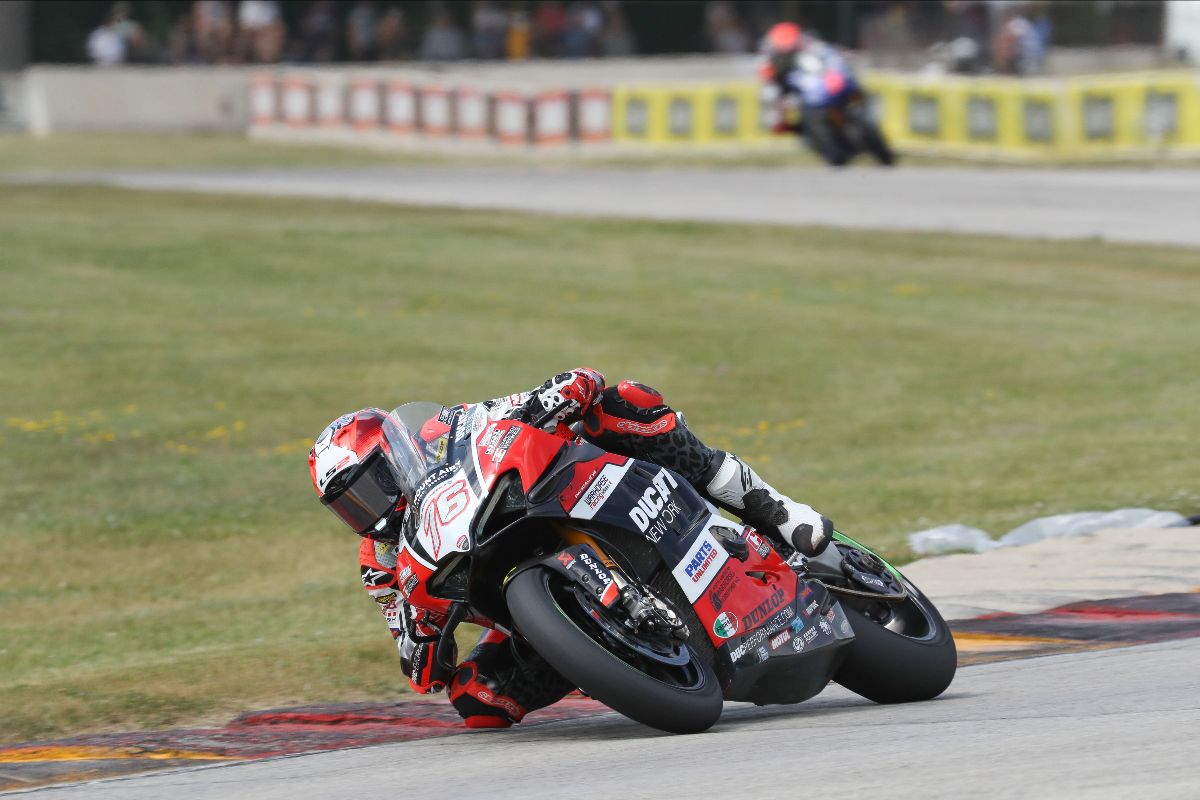 Loris Baz earned his second podium of the season when he passed both Bobby Fong and Cam Petersen on the last lap. Photo by Brian J. Nelson 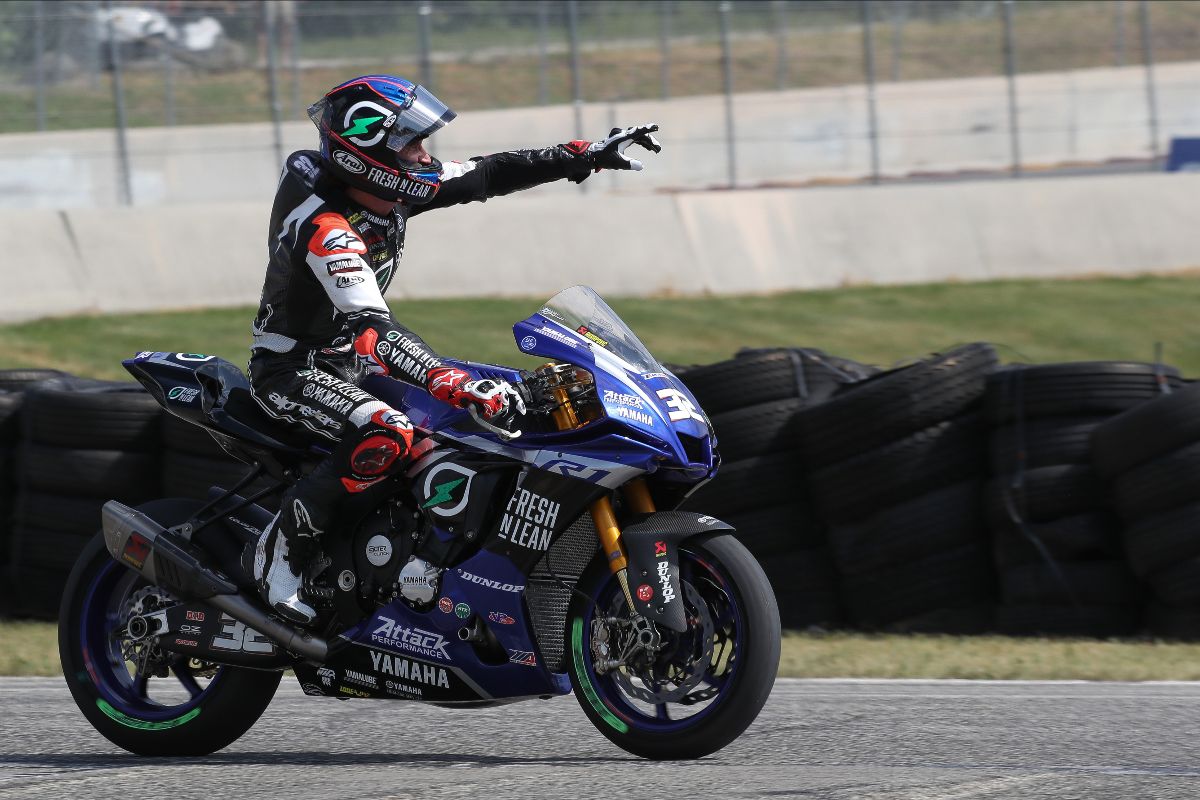 Ford Motor Company On Board With MotoAmerica

May 28, 2019 Motor Sports NewsWire Motorcycle - Road Racing, Powersports, Racing Comments Off on Ford Motor Company On Board With MotoAmerica

Ford Will Display Its Vehicles At Three Events COSTA MESA, CA – May 28, 2019 – (Motor Sports Newswire) – MotoAmerica is proud to announce that the Ford Motor Company is joining the 2019 MotoAmerica […]

MotoAmerica Support-Class Preview: There Is Only One Who Is Undefeated

May 20, 2021 Motor Sports NewsWire Motorcycle - Road Racing, Powersports, Racing Comments Off on MotoAmerica Support-Class Preview: There Is Only One Who Is Undefeated

Only One Rider Emerged From The Opening Round In Georgia Without A Loss: Sean Dylan Kelly IRVINE, CA – May 20, 2021 – (Motor Sports NewsWire) – Only one rider arrives at VIRginia International Raceway […]