INDIANAPOLIS, IN – October 11, 2020 – (Motor Sports NewsWire) – Three things of note jump out after a three-HONOS Superbike race weekend at Indianapolis Motor Speedway: for starters, Italian Lorenzo Zanetti ended a winless drought for Ducati in AMA Superbike racing that dated back to 2010. Then there was Bobby Fong’s arrival as a bonafide MotoAmerica Superbike star with a weekend that saw him win two races and finish second in the only one he didn’t win. And it all wrapped up with the bow on top being the fact that Cameron Beaubier emerged from a somewhat difficult weekend with a fifth MotoAmerica Superbike Championship in his back pocket.

For the first time all season, Monster Energy Attack Performance Yamaha’s Beaubier wasn’t the dominant force at Indy. With the weight of trying to put the championship on ice in the penultimate round, Beaubier had some struggles. He crashed out of Saturday’s race one and it put a visible dent in his confidence for Sunday’s two races. Even with the pressure, he persevered and finished on the podium in both races – third in race two and second in race three. With that, he takes an insurmountable 97-point lead to WeatherTech Raceway Laguna Seca in two weeks where he hopes to return to his winning ways in an attempt to match Josh Hayes’ 16-win season from 2012.

“A long time,” Beaubier said when asked how long Sunday’s second race felt like it lasted. “To be honest, I felt like I just lost a little confidence after three crashes this weekend, and the little electrical gremlins we had, which it doesn’t happen often, but the Superbikes, the electronics are so complex that just one little thing you do wrong can just kind of throw everything off. Luckily everything was fine that last race today, but after the tires heat cycle, I just had no confidence, man. Sure, I could have gone faster but I wanted to bring this thing home after crashing three times and having my guys stay up until midnight a couple nights this weekend fixing my bike. Obviously, I’m over the moon happy, but I’m just relieved at the same time to get this plate for my guys, for Monster Attack Yamaha and everyone at the team, my family, my friends, everyone that supports us. 6D my helmet sponsor, it’s their first Superbike Championship and I think Attack’s first Superbike Championship as well.

“I just had pure fun this year. It was so fun just ripping off those wins. I was just really enjoying riding my bike all year. I’ve never felt so comfortable on a bike and just at home with my guys. We really built a family together, Yamaha and me. It’s just such a privilege to ride for them. This is my eighth-year riding for them, and we’ve been able to rack up six championships together. I’m just so thankful for the opportunity and everything they’ve given me. Just going to enjoy this one and go have fun at Laguna.”

Zanetti, meanwhile, started Sunday morning off with a victory on his Warhorse HSBK Racing Ducati New York Panigale V4 R Superbike in the second of the three HONOS Superbike races following his first podium a day earlier. The win ended a drought for Ducati in the AMA Superbike Series as it was Ohioan Larry Pegram who rode his privateer Ducati to the Italian manufacturer’s last victory at Auto Club Speedway in Southern California on March 27, 2010.

In winning at The Brickyard, Zanetti also became the first Italian to win an AMA Superbike race since Alessandro Gramigni rode a Fast By Ferracci Ducati to victory at Brainerd in 1996.

Zanetti was in a race-long battle with Saturday’s race-one winner Fong and his M4 ECSTAR Suzuki for the duration of race two on a cloudy and cool Sunday morning, the Italian taking over for the first time with three laps to go. On the final lap, Zanetti was able to hold off Fong by just .196 of a second. Beaubier was third, .323 of a second from the win with his teammate Jake Gagne a close fourth. With the top four covered by just .505 of a second it was the best HONOS Superbike race of the year, thus far.

“I compared yesterday, and the key of today is the work of the guys during the night,” Zanetti said. “They changed the balance for the bike. Yesterday, I’m not really confident on the front tire. Today I did a really good job. This morning in warmup I was in first place so I think that the whole race I can win. It’s not easy because from yesterday also the tire (temperature) is different, maybe seven or eight degrees less. So just try to keep calm because yesterday when I tried to stay in front to Bobby (Fong) I did a mistake, so today I just stay on back for half part of the race and study. So, when I try in the last four or five laps, the tire is dropped and it’s difficult to manage. Some parts of the track Bobby is better than me, and some I’m better. So, it’s difficult, but in the end is all right. I don’t want to think a lot. Just try to improve a little bit again for the second race of today and try to be again on the podium. This is incredibly important for me but also for Ducati because four months ago not many people trust in me that I can do it, to be able to ride in the U.S. and win some races. So, I think it’s a really good target today for me.”

The third race was all Fong. After a red flag came out when his M4 ECSTAR Suzuki teammate Toni Elias crashed out of the lead (and right in front of him), Fong simply dominated. Chased by Gagne and Zanetti, Fong’s win got really comfortable when Gagne crashed and Zanetti ran straight at the end of the front straight, joining in fourth place. Gagne was able to remount from his blunder to finish seventh, but the miscues moved Beaubier to second and he was able to hold off Zanetti’s charge to take the spot – 9.8 seconds behind the fleeing Fong.

“No, it’s a good feeling,” Fong said when asked if this was the best weekend of his life. “First of all, I just want to say congratulations to Cameron (Beaubier). The whole pack has been chasing him all year long. He’s rode so good all year long. Hopefully, we’ll battle with him at Laguna. We all know if he didn’t have a championship to win, he would have been right there with me or in front of me. Who knows? But it’s been a good weekend. I can’t complain. It’s been weird, though. This weekend we haven’t changed anything on the bike. We started FP1 and we made minor changes, a few clicks of something, whatever. Usually every weekend we have a completely different motorcycle every session, almost. This was the first weekend where I said, ‘Just don’t touch it. I’ll figure it out.’ We made a little bit of TC stuff and fork maps, but other than that this was the most consistent motorcycle I’ve rode this year. So, it definitely paid off and I definitely had a good feeling out there. Had plenty of moments out there on the front (tire), just trying to get a 36 (1:36 lap time) for a while but it didn’t happen. Thankful to get some money and get the win. Looking forward to Laguna.”

With Fong (2-1 finishes), Zanetti (1-3 finishes) and Beaubier (3-2 finishes) getting the most out of the weekend, what of the rest?

Scheibe Racing BMW’s Josh Herrin mixed it up with the lead pack in both races before eventually finishing sixth and fourth, giving him the fourth highest point score on the day.

Gagne was then the best of the rest, though the Californian looked to deserve even better as he was set to finish on the podium for a second straight day until the crash in race two. Still, he ended the day with fourth- and seventh-place finishes.

Altus Motorsports’ Cameron Petersen, who wrapped up the Stock 1000 title on Saturday, finished sixth and seventh in the two races on Sunday; KWR Racing’s Kyle Wyman ended up ninth and fifth with his brother Travis riding the Travis Wyman Racing BMW to two eighth-place finishes.

To purchase tickets for any of the 2020 series round, click HERE

For information on how to watch the 2020 MotoAmerica Series, click HERE 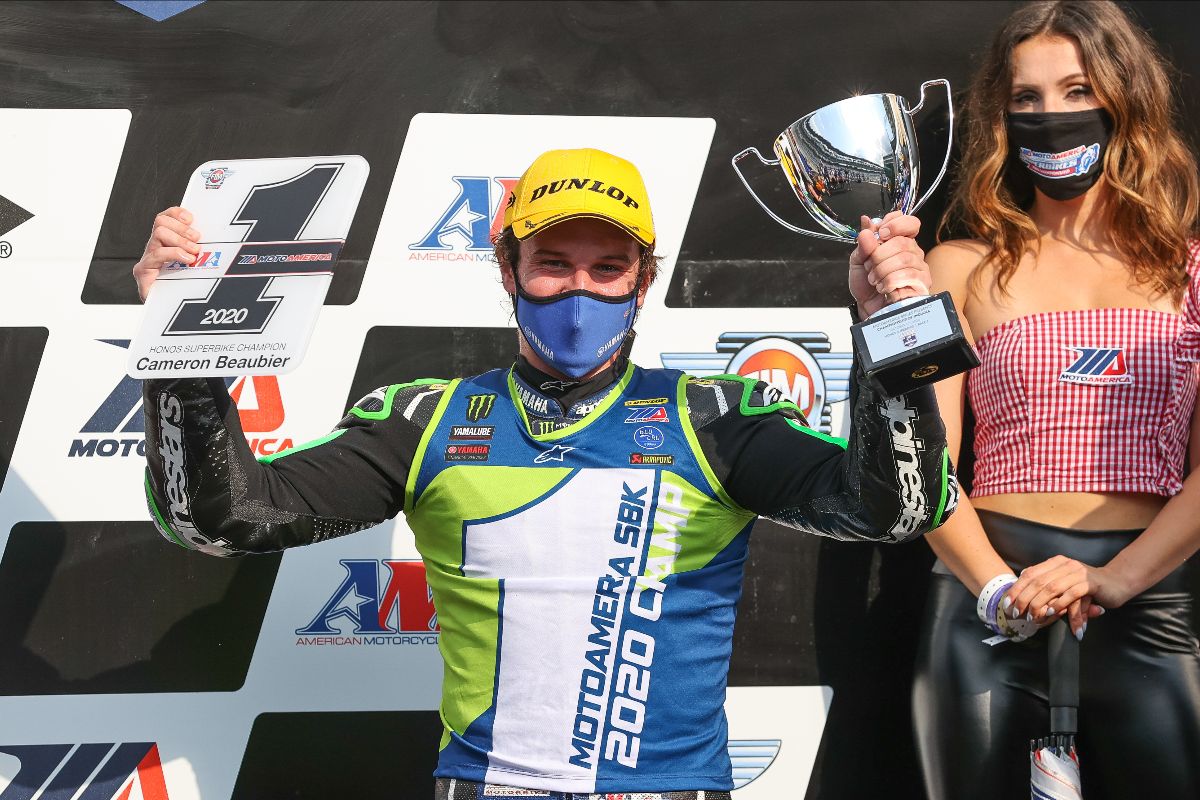 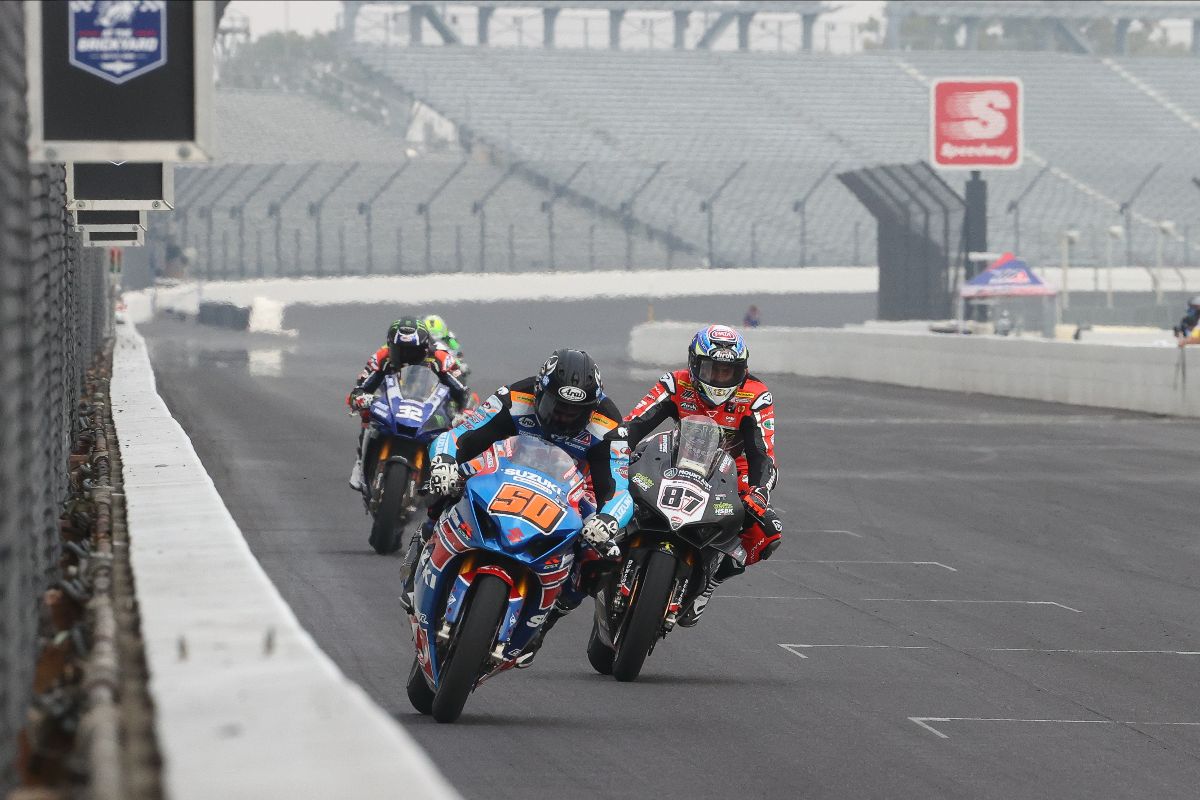 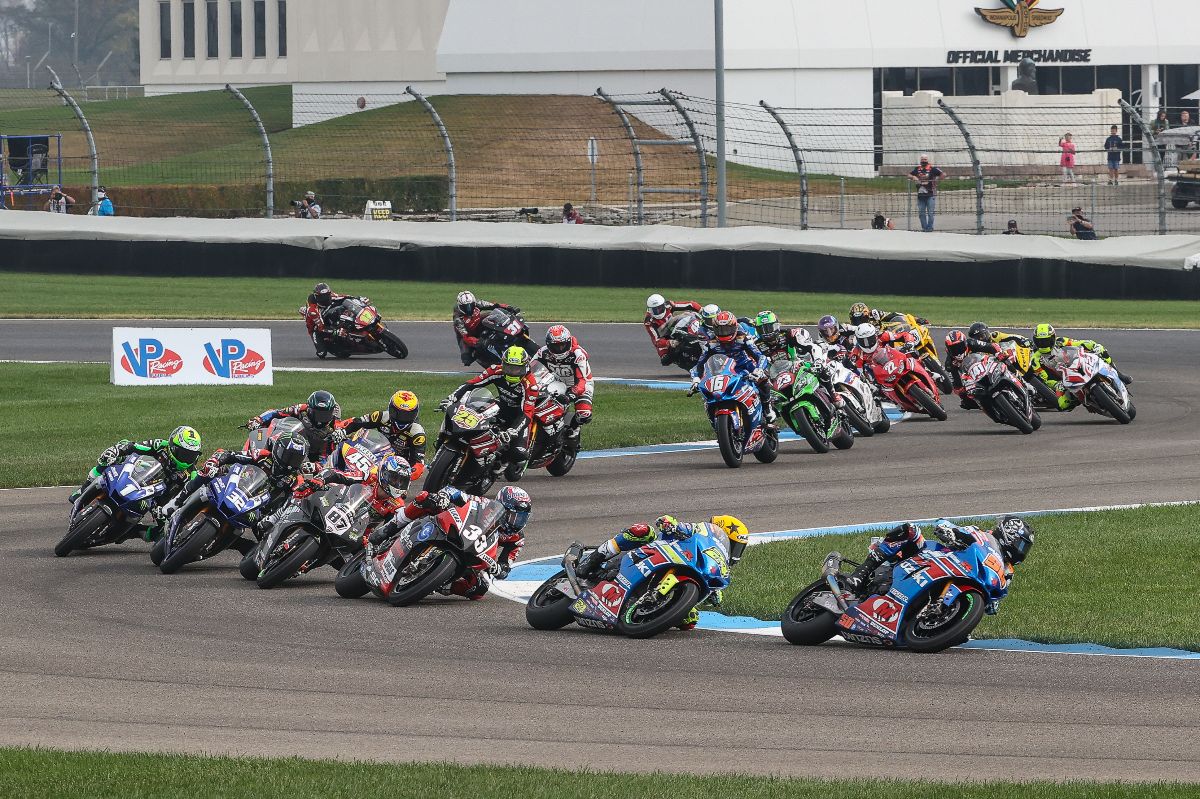 (From left to right) Beaubier, Fong and Zanetti celebrate their race three finishes on The Brickyard podium. Photo by Brian J. Nelson