HURRICANE MILLS, TN – August 5, 2020 – (Motor Sports NewsWire) – After months of anticipation, motocross racing has finally returned as the 39th running of the Monster Energy AMA Amateur National Motocross Championshipkicked off its action-packed week of motos on Tuesday from famed Loretta Lynn’s Ranch. A full slate of action headlined the day, with the first 22 motos of the 2020 event getting underway at 7:30am Central Time.

As the proving ground for the future stars of American motocross, the AMA Amateur National Motocross Championship is a showcase of the world’s most sought after talent. Since 1982, the biggest names in the sport have left their mark on the hallowed grounds of this prestigious event and this year’s journey to crown 36 AMA National Champions is destined to be as compelling as ever.

The 2020 lineup for 250 Pro Sport was brimming with talent, with the likes of Stilez Robertson (Rockstar Energy Husqvarna Factory Racing), Mason Gonzales (Yamaha/Rock River/bLU cRU Amateur Motocross Team) and Dilan Schwartz (BarX/Chaparral/Suzuki) leading the way as title favorites. When the gate dropped on the first of three motos for the class, it was Gonzales who emerged with the STACYC Holeshot to assume the lead on the opening lap. Schwartz was able to grab a good start as well and immediately went on the attack for the lead, getting around Gonzales before the end of Lap 2

The clear track on a layout that was only getting rougher with each passing lap proved to be all Schwartz needed. The Suzuki rider continued to build a lead over Gonzales through the first half of the moto, which soon caused the Yamaha rider to come under fire from the Husqvarna of Robertson. The battle for second heated up right at the halfway point, with Robertson eventually getting the upper hand, dropping Gonzales to third.

As the minutes wound down, Schwartz and Robertson traded faster lap times, which ultimately kept the distance between them at around eight seconds. Schwartz carried on to take the checkered flag and open his week with a moto win, while Roberston successfully battled from a fifth-place start to earn a runner-up result. Gonzales parlayed his holeshot into a podium finish in third. 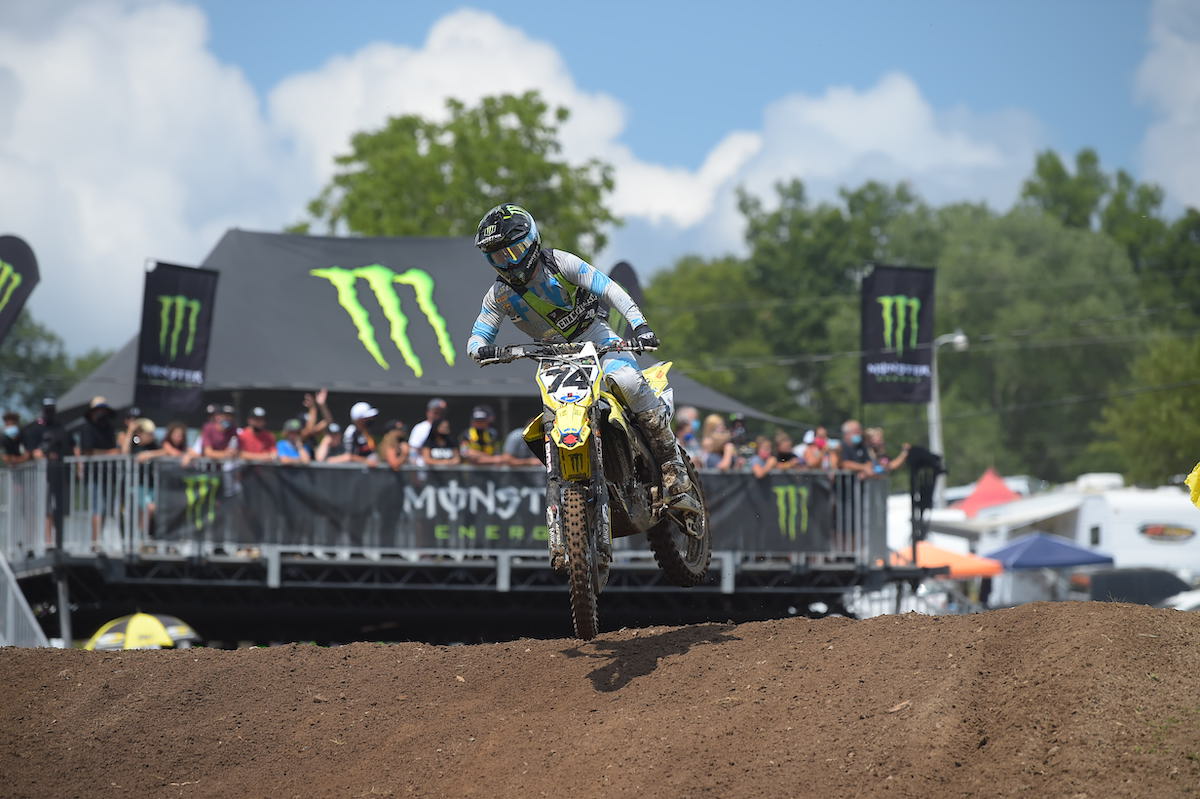 Much like its Pro Sport counterpart, the 250 B division is also loaded with heavy hitters. At Monster Energy Kawasaki Team Green, Jett Reynolds and Chance Hymas were generating a lot of buzz, while the Monster Energy/Star/Yamaha Racing duo of Matthew Leblanc and Nick Romano were in the discussion as favorites to win the title. KTM was well represented as well with Troy Lee Designs/Red Bull/KTM’s Nick Thrasher and Rides Unlimited KTM’s Jack Chambers.

As the 250 B field roared out the gate for its opening moto it was Yamaha rider Kyle Smith who grabbed the STACYC Holeshot, but he quickly dropped back several positions. That allowed Hymas to take control as the early leader, with Leblanc right behind in second. Suzuki rider Carter Biese, Thrasher, and Romano rounded out the top five.

The ability to get up front early benefitted both Hymas and Leblanc, as both riders were able to soon distance themselves from the field, setting the stage for a head-to-head battle for the win. Behind them, Thrasher and Romano duked it out for third. Just past the halfway point of the moto, Leblanc began to apply pressure on Hymas for the lead. They engaged in an exciting battle for the position, with Hymas putting up a valiant fight. Eventually Leblanc made the pass stick, while Romano was able to get the better of Thrasher and move into podium position.

Leblanc piloted his Yamaha to the Moto 1 victory by just over five seconds over Hymas, but drama unfolded on the final lap in the battle for third. Romano, who appeared to have the position in hand, encountered misfortune that also involved Thrasher, which dropped both riders out of contention for a strong result. The opened the door for Reynolds, who started ninth, to steal third and claim the final spot on the podium. Thrasher recovered to finish ninth, while Romano soldiered home to a 12th-place finish. 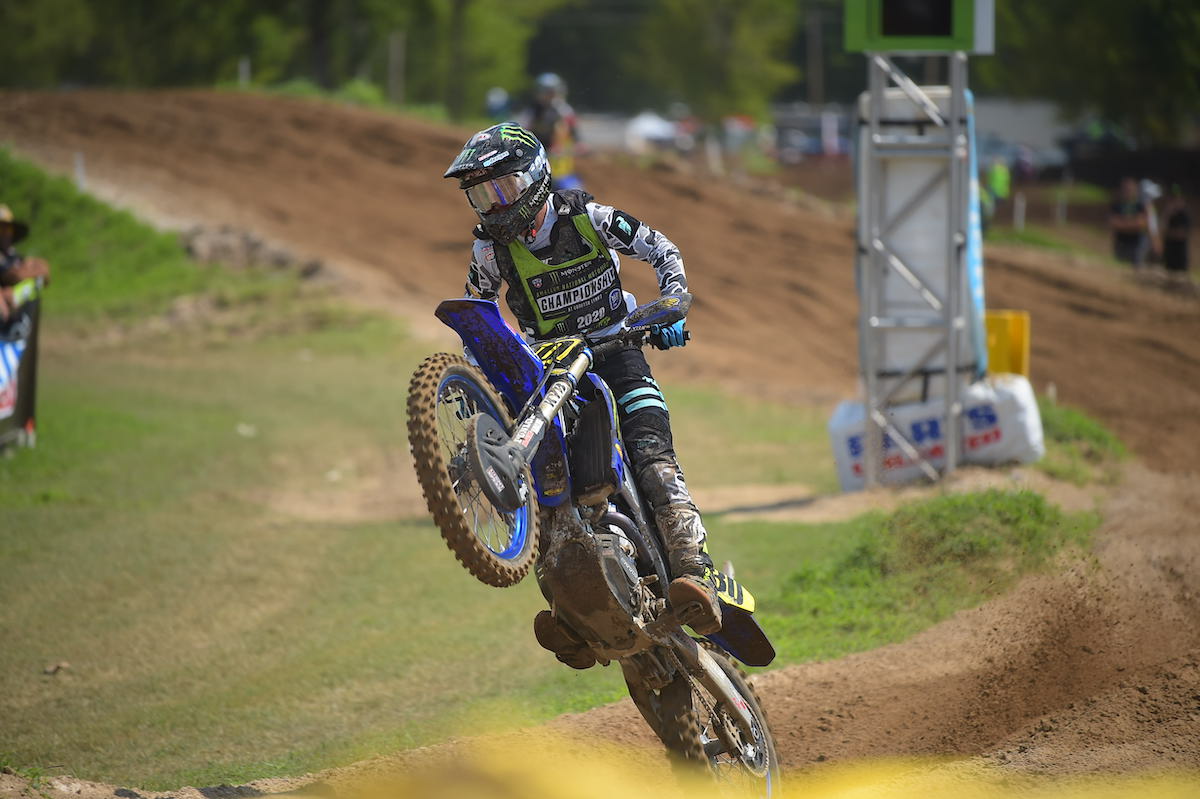 Matt Leblanc showed why he’s a title contender with his 250 B win.
Photo: Ken Hill

The two most talked about riders coming into the week for the 125cc B/C title were Troy Lee Designs/Red Bull/KTM’s Max Vohland and Rockstar Energy Husqvarna Factory Racing’s Talon Hawkins. When the first moto got underway, neither of these two riders were in the mix. Instead, EBR Performance KTM’s Crockett Myers earned the STACYC Holeshot before giving way to MTF KTM’s Gage Linville, who moved into the early lead over Myers and GasGas’ Matti Jorgensen Jr.

With the holeshot Linville was able to establish himself comfortably out front, but all eyes were on both Vohland, who started fifth, and Hawkins, who was back in 14th. Despite not starting in the lead group, Vohland had his KTM dialed in and quickly charged up to second place. With Linville in sight, he tracked down the leader and made an exceptional pass to seize control of the race just past the halfway point. Linville did all he could to stay in touch, but Vohland charged to the moto win by over six seconds. Yamaha rider Larry Reyes Jr. rounded out the podium, while Hawkins could only climb his way up to seventh.

After a memorable battle for the championship in the Women’s division last year that saw Jazzmyn Canfield take the title, this class was one of the most anticipated for the 2020 event. With Canfield out with injury, the door is open for her primary rivals from a summer ago, Team SBG Racing/Maxxis/Babbitt’s Online Kawasaki’s Jordan Jarvis and Newground Husqvarna’s Hannah Hodges, to take home the vacant crown.

As expected, the opening Women’s moto came down to these two exceptional competitors. Hodges was able to edge out Jarvis for the STACYC Holeshot, but Jarvis jumped out to the lead on the opening lap. The two were separated by mere bike lengths early on, with KTM Orange Brigade’s Tayler Allred right behind in third. With a clear track ahead of her, Jarvis was able to inch away from Hodges and sustained a consistent pace over the second half of the moto that her rivals were unable to sustain.

Jarvis brought home the opening moto victory by 19 seconds over Hodges, with Allred solidly in third. 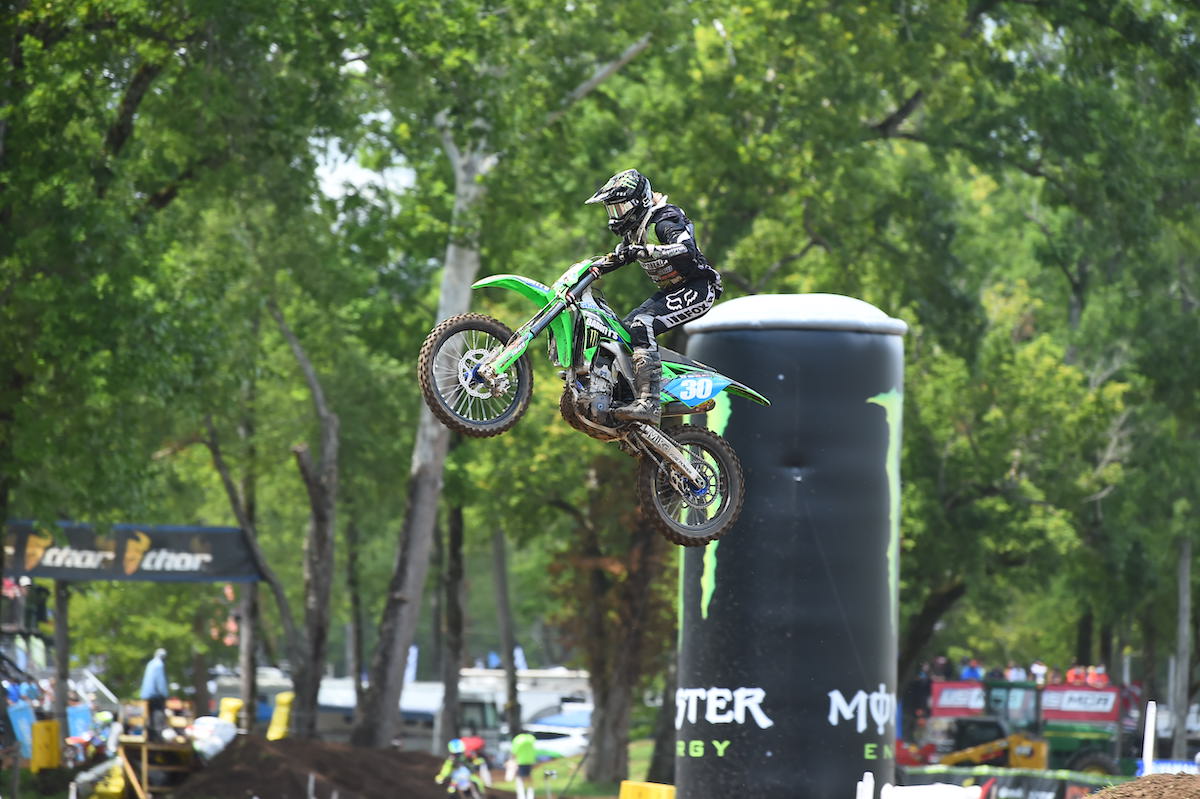 Jordan Jarvis made a statement with her victory in the Women class.
Photo: Ken Hill

The Supermini 2 class is another division with deep talent throughout, spearheaded by Monster Energy Kawasaki Team Green’s Ryder Difrancesco in addition to his fellow Team Green rider Gavin Towers, Rockstar Energy Husqvarna Factory Racing’s Evan Ferry, and EBR Performance KTM’s Benjamin Garib. When racing got underway for the first moto, each of these riders assumed their positions at the head of the pack, with Garib prevailing with the STACYC Holeshot.

Even with the early advantage, Garib couldn’t hold off the Kawasaki’s of Towers and Difrancensco, who both made their way around. Towers’ hold on the lead was brief, as Difrancesco made the pass stick before Lap 2 and never looked back. Even though Towers was able to keep Difrancesco honest for a while, the lead grew significantly over the second half of the race. Towers soon came under fire from a hard-charging Ferry, who started fifth, with second place changing hands just past the halfway point.

Difrancesco cruised to the Moto 1 win by nearly 13 seconds over Ferry, while Towers held on for third.

As a member of one of the motorsports world’s most successful racing families in recent years, it’s not a surprise to see that Haiden Deegan is ready to leave his mark on amateur motocross. The KTM Orange Brigade rider couldn’t have asked for a better start to the week, where he’s well on his way to continuing what’s become a flourishing career.

Deegan raced twice on Tuesday, in both the Mini Sr. 1 and Mini Sr. 2 classes, and was nearly perfect in each. Even though the STACYC Holeshots went to Monster Energy Kawasaki Team Green’s Krystian Janik (Mini Sr. 1) and KTM rider Thomas Wood (Mini Sr. 2), Deegan led every single lap in each moto en route to a pair of moto wins, both by double-digit margins.

Following Deegan across the line in both motos was Triangle Cycles/bLU cRU/Yamaha’s Logan Best in second and Janik in third.

The smaller displacements are where the early stages of rider progression are displayed, and for the 65cc (10-11) Limited class all attention was centered on KTM Orange Brigade’s Seth Dennis and Yamaha/Rock River/bLU cRU Amateur Motocross Team rider Canyon Richards coming into the week. Even with the pressure to succeed, both riders responded with impressive poise.

Out of the gate it was KTM rider Deacon Denno who made the first statement with the STACYC Holeshot, but Dennis made the pass for the lead on the opening lap and asserted himself out front. Denno held onto second briefly, but Richards soon found his way into the runner-up spot and gave chase to Dennis. The lead duo mirrored one another in lap times for most of the moto, until a late surge by Dennis helped carry him to a victory of nearly 11 seconds over Richards, while Denno parlayed his holeshot into a podium result in third. 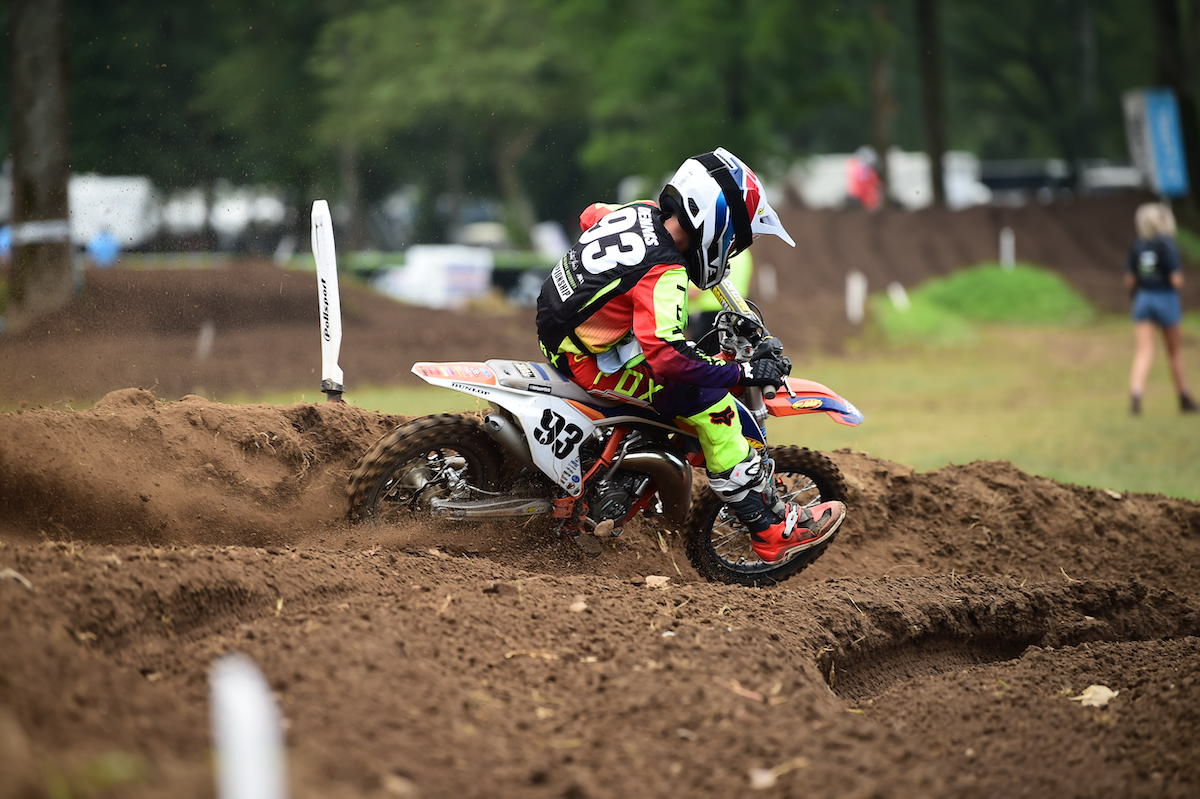 The second day of motos for the 2020 AMA Amateur National Motocross Championship continues Wednesday, August 5. Broadcast coverage of every moto can be seen exclusively on Racer TV.

For more information on the Monster Energy AMA Amateur National Motocross Championship, visit the series official website at www.mxsports.com or call (304) 284-0101. Join the conversation on the event’s social media channels, along with receiving the most up-to-date news and exclusive content.

The Monster Energy AMA Amateur National Motocross Championship is the world’s largest and most prestigious amateur motocross racing program. This year due to COVID-19 the qualifying system was broken into a five-week Regional Championship system. The qualifying system culminates in the National Final (first week in August) hosted annually since 1982 at the home of country music star Loretta Lynn in Hurricane Mills, Tenn. Christened “The World’s Greatest Motocross Vacation”, the National event serves as a launch pad for some of the biggest names in professional motocross and supercross, including Ricky Carmichael, James Stewart, Ryan Villopoto, and Ryan Dungey. The national program is produced by MX Sports, Inc., a West Virginia-based race production company and is sanctioned by the American Motorcyclist Association (AMA). For more information, visit www.mxsports.com.

Founded in 1924, the AMA is a not-for-profit member-based association whose mission is to promote the motorcycle lifestyle and protect the future of motorcycling. As the world’s largest motorcycling rights and event sanctioning organization, the AMA advocates for riders’ interests at all levels of government and sanctions thousands of competition and recreational events every year. The AMA also provides money-saving discounts on products and services for its members. Through the AMA Motorcycle Hall of Fame in Pickerington, Ohio, the AMA honors the heroes and heritage of motorcycling. For more information, visit www.americanmotorcyclist.com.

Not a member? Join the AMA today: www.americanmotorcyclist.com/membership/join.

Full SIDRA schedule will be sanctioned by the AMA PICKERINGTON, OH – February 2, 2017 – (Motor Sports Newswire) – The Southwestern Idaho Desert Racing Association has chartered with the American Motorcyclist Association for the […]