JGRMX/Yoshimura/Suzuki Racing Pushes Through Challenges at Round 15

BREA, CA – June 15, 2020 – (Motor Sports NewsWire) – The JGRMX/Yoshimura/Suzuki Racing team tackled Round 15 of the 2020 Monster Energy Supercross series in Salt Lake City, Utah with improved starts and finishes. Broc Tickle turned an LCQ holeshot into a second-place finish, and then battled toward a top-ten on his Suzuki RM-Z450 to match a season-best. Fredrik Noren showed top form, but a mistake prevented the finish that his speed promised. Suzuki RM-Z250 rider Alex Martin had an impressive second-place finish in his heat race but was derailed by an on-track incident in the main event.

After missing a direct transfer by one spot in his heat race, Tickle pulled a holeshot in the LCQ and brought his JGR-tuned RM-Z450 in with a second-place finish. In the main, Tickle recovered from a disappointing jump off the gate and charged toward a top-ten position but had to settle for a 12th place finish, which is a step forward in Tickle’s progress after a mid-season hand injury.

“Overall it was a better day on the track today,” said Tickle. “We made some changes in the right direction to give me more comfort on the bike. In the LCQ it was good to get a holeshot and get some more laps on the track.”

“Tickle was feeling good but this track was tougher on his hand,” said Jeremy Albrecht, Team Manager. “He kept pushing every race to do his best and ended up 12th in the main. I know Broc can do even better at these next two rounds.” 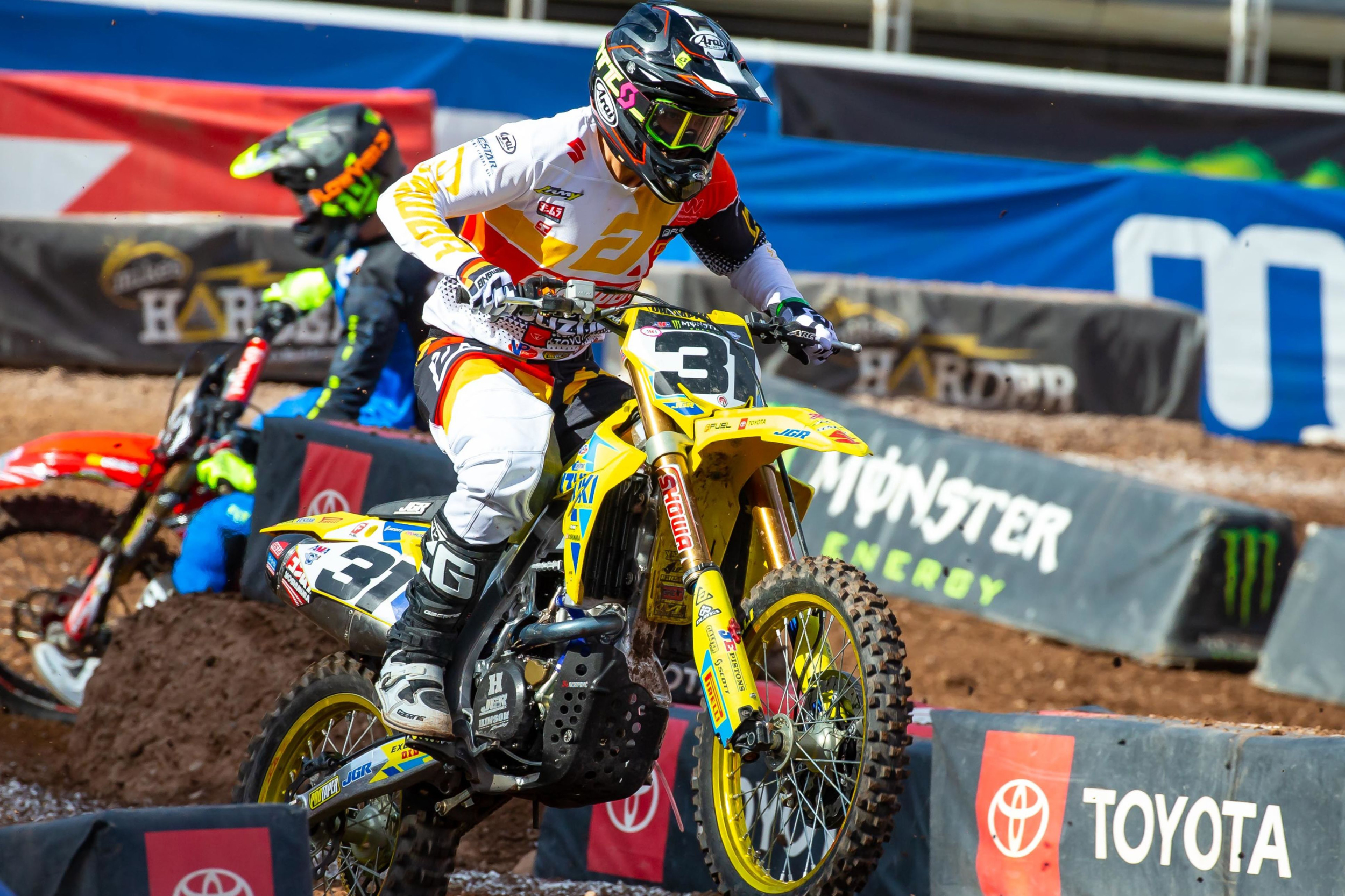 Freddie Noren (#31) continues to progress while racing with an injured foot.

Noren began the day with a strong start in his heat race but eventually lost the direct transfer position. In the LCQ, Noren was caught up in a first turn pile-up and immediately began his charge through the pack; ultimately missing the main by a couple of positions. Noren felt good about his progress as it reinforced that he has the speed to finish the season strong.

“It may not show but I had some good improvements this race,” said Noren. “We made some small changes to the bike that I really liked and my riding is getting better. I’m really looking forward to finishing strong in the next two rounds.” 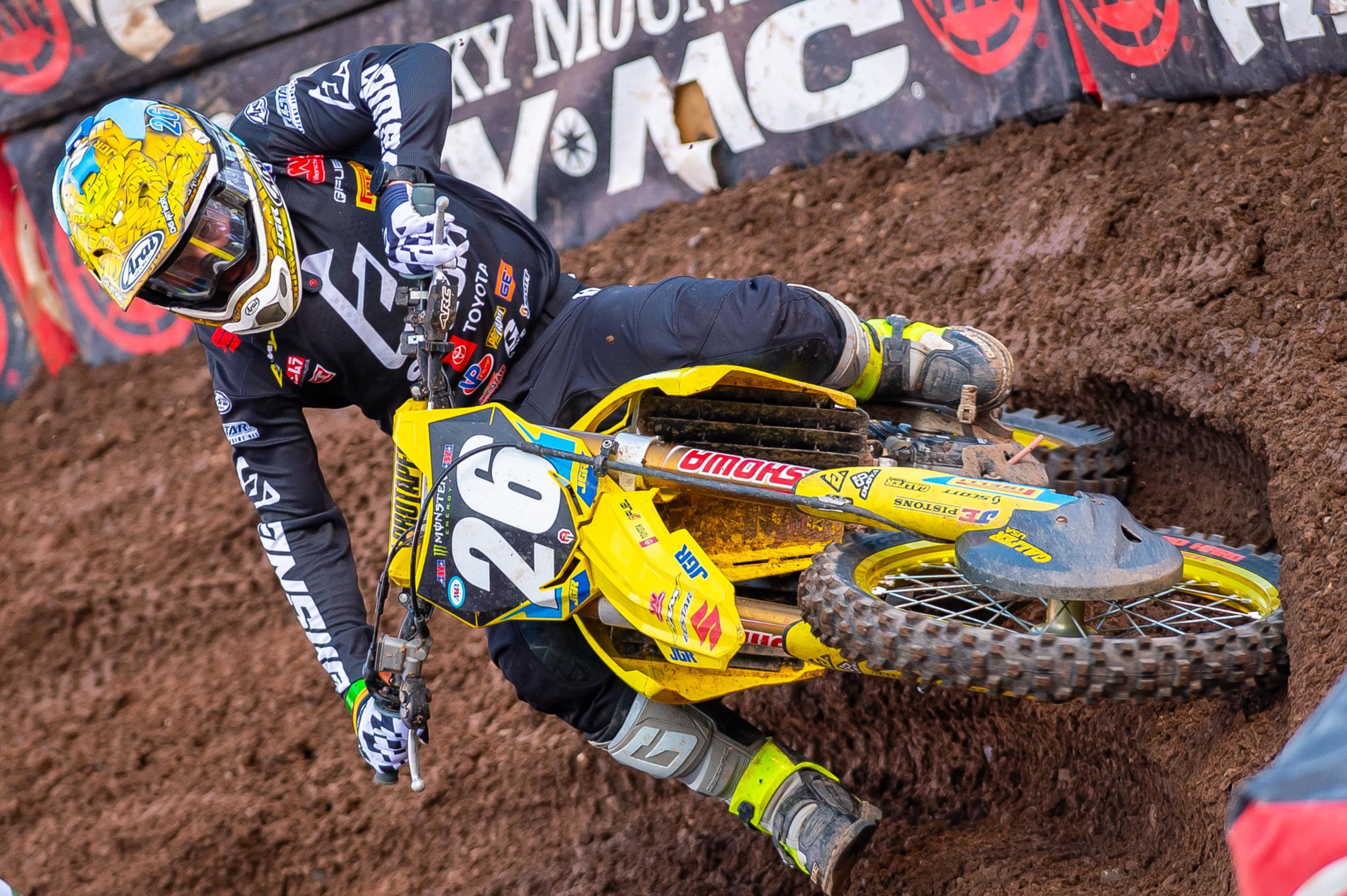 Alex Martin (#26) battles his way through the points standings in the 250 West Championship.

In 250 West racing, Martin had a strong heat race, quickly turning a fifth-place start into a second-place position. In the main, “A-Mart” started near the front and ran most of the race inside the top-ten, but a mistake involving a crashed lapper ended his night with disappointing results. Martin remains determined to make his way up to the podium.

“I qualified better in practice and my intensity was coming around,” said Martin. “My heat race was good with a strong finish. I’m very frustrated with the main but also motivated to end the series on a high note next weekend.”

The JGRMX/Yoshimura/Suzuki team will gear up again this Wednesday, June 17th for another 7:00 PM ET race in Salt Lake City, and is looking to focus its efforts on strong rides from each of its racers.

Expanded Product and Technical Support will be Available to Racers Throughout the Entire 17-Round Season ROME, GA – January 5, 2019 – (Motor Sports Newswire) – The talented roster of Pirelli racers will ring in […]