SALT LAKE CITY, UT – June 7, 2020 – (Motor Sports NewsWire) – The 2020 Monster Energy AMA Supercross, an FIM World Championship series ran into its first mud race of the year at Round 13 Presented by Rocky Mountain ATV/MC. The slick, rutty, and wet conditions inside Rice-Eccles Stadium delivered one of the great Supercross battles that will be re-watched for years. Monster Energy Kawasaki’s Eli Tomac came out on top of the 24-lap dogfight with Red Bull KTM’s Cooper Webb. Rounding out the podium was 2018 series champion Rockstar Energy Husqvarna Factory Racing’s Jason Anderson. In the Eastern Regional 250SX Class, GEICO Honda’s Chase Sexton re-claimed sole possession of the points lead after a dramatic race restart during the only downpour during the racing. 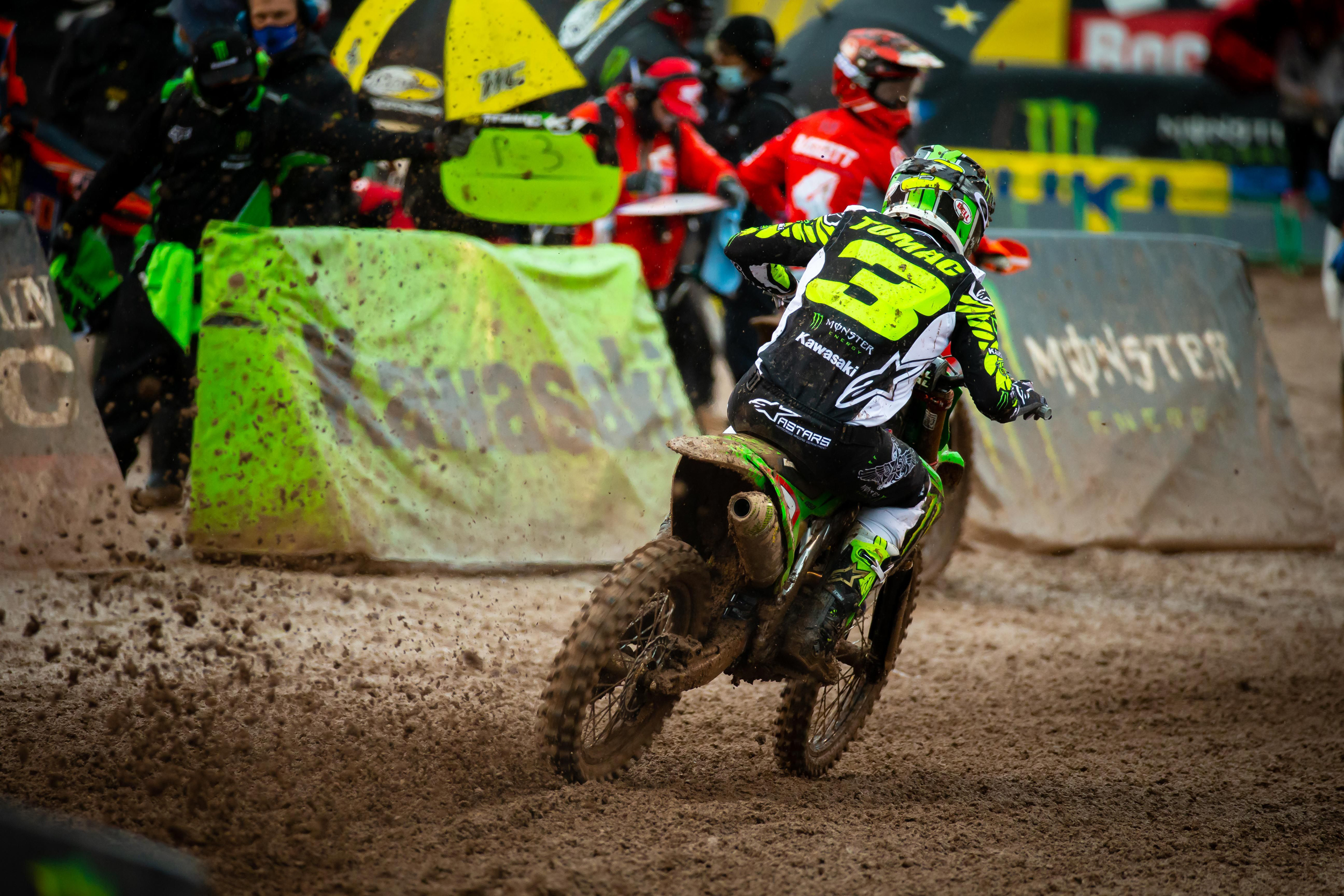 Eli Tomac and Cooper Webb left no doubt that both riders love to win and hate to lose, leaving everything they had on the technical and slippery track. Photo Credit: Feld Entertainment, Inc.

Rockstar Energy Husqvarna Factory Racing’s Zach Osborne nabbed the holeshot in the 450SX Class Main Event, but Webb applied the pressure hard right from the start. The KTM rider got around Osborne shortly after the first lap was complete and Tomac was around Osborne seconds later. With over 18 minutes on the race clock the battle lines were drawn on a track that was soaked from rain and hail the night prior.

Webb needed the win to keep his title defense alive. Tomac, entered the round with a 13-point lead over Team Honda HRC’s Ken Roczen and 29 points over Webb; the Kawasaki rider could have afforded to settle second place, but about eight minutes into the 20-minute plus one lap race, Tomac blitzed into the lead through the whoops. From there the two front runners, Tomac and Webb, put down blazing fast speed, lapped riders a handful at a time, and found new lines jumping through the rutted rhythm sections.

Webb regained the lead with about six minutes left on the clock, clearly pushing hard and bordering at the edge of traction. A few laps later Tomac made it past Webb once again and held tight until the end. The win catapulted Tomac into a full-race lead in the points after Roczen put in a tenth-place finish. The Honda rider, who announced prior to the race that he was struggling with a physical ailment, was lapped twice by Tomac and Webb. Jason Anderson, the only other rider on the lead lap at the checkers, put his Husqvarna on the podium for the first time in Salt Lake City in 2020, adding to his three previous podiums this season. In the past, Anderson has struggled with high-altitude races but clearly rode strong at this third event in Utah.

resh off his 34th victory, which moved Tomac up to a sixth-place tie on the all-time win list with Ryan Dungey, Tomac said about his decision to go for the win, “When I got passed half way… I mean, I did not want to let this thing go. I was feeling so good and comfortable at that point there was no reason to take it a level down there. I ended up getting the triple combo at the end of that rhythm. That was the make-or-break for me. That was unbelievable. We passed each other twice in the whoops, or once or twice there. That was a great battle. Really fun though.”

In the Eastern Regional 250SX Class two riders came into the night tied in points, but it was Chase Sexton who left with the race win and a three-point lead with only one more traditional round and then the East/West Showdown remaining to determine the 2020 champion. Sexton was off to a disastrous race after a first lap crash, but he benefitted from a red-flag restart. In the re-start, Round 12 winner Monster Energy / Star Yamaha’s Shane McElrath grabbed the holeshot with Sexton right behind. The riders instantly separated themselves from the field but didn’t separate from one another. As the 15-minute plus one lap race neared five minutes in, McElrath made contact with a lapped rider and went down. Sexton breezed past and took an uncontested win, along with the uncontested points lead as the Eastern Regional series takes two rounds off for the Western Regional series to race.

Sexton on the podium said, “Shane’s been kind of on a roll and I’ve been making a lot of mistakes out here, so I got a gift with that red flag. Honestly, I was being way too impatient in the first couple of opening corners in the first race. Man, when they red-flagged I’m like, ‘I gotta win this, this is my race.’ I felt really good all day, and yeah, it was really good. I felt super good. I lost my front brake like halfway through that main event. Running into lappers, it was bad out there. I felt really good, but was just kinda waiting behind Shane. I knew I was faster in the whoops and just kinda waiting for a moment to take it. And he ended up making a mistake, so it was good and I’m happy to head into this little break we got with the red plate.”

With races being run twice each week it’s possible to realistically predict clear skies and dryer conditions for the remaining four rounds. Each event will be presented before the live TV cameras of NBCSN, NBC and the NBC Gold app; the next race takes place on Wednesday, June 10 beginning at 7:00 PM ET, when the gate will drop for Round 14 of the 450SX Class and Round seven of the Western Regional 250SX championship; it will be the Western Regional 250SX Class’s first appearance at Salt Lake City this year. For more information please go to SupercrossLIVE.com.

Round 13 Post-Race Press Conference – Audio Only

Monster Energy AMA Supercross, an FIM World Championship, is the most competitive and highest-profile off-road motorcycle racing championship on the planet visiting 13 different states in 2020. Founded in America and sanctioned by the American Motorcyclist Association (AMA) in 1974, Supercross is currently co-sanctioned by the Federation Internationale de Motocyclisme (FIM), the official global governing body for motorcycle racing, thus making it a formal World Championship. Over 17 weeks and a million-dollar All-Star Race, Supercross attracts some of the largest and most impressive crowds inside the most recognizable and prestigious stadiums in North America to race in front of nearly one million live fans and broadcast to millions more worldwide. For more information, visit SupercrossLIVE.com.

About the American Motorcyclist Association:

Austin Forkner Kicks Off Eastern Regional 250 SX Series With a Win Minneapolis, MN – February 10, 2019 – (Motor Sports Newswire) –  The weather was below zero outside but inside the U.S. Bank Stadium […]