SANTA FE SPRINGS, CA – April 12, 2021 – (Motor Sports NewsWire) – Performance product maker Vance & Hines today announced the launch of a new 160-cubic-inch V-Twin motor for use in NHRA Pro Stock Motorcycle drag racing. The motor is specifically designed for use with the NHRA-approved Buell 1190RX bodywork. This is the first time that Vance & Hines has designed a motor for use in a Buell race bike.

The new powerplant, tagged the “VH160VT,” was developed at the company’s Racing Development Center (RDC) in Brownsburg, Indiana. The engine architecture is a 60-degree v-twin with pushrod-driven valves and is capable of turning 10,000+ RPM. It has been approved by NHRA and will be offered to teams participating in NHRA Pro Stock Motorcycle racing. 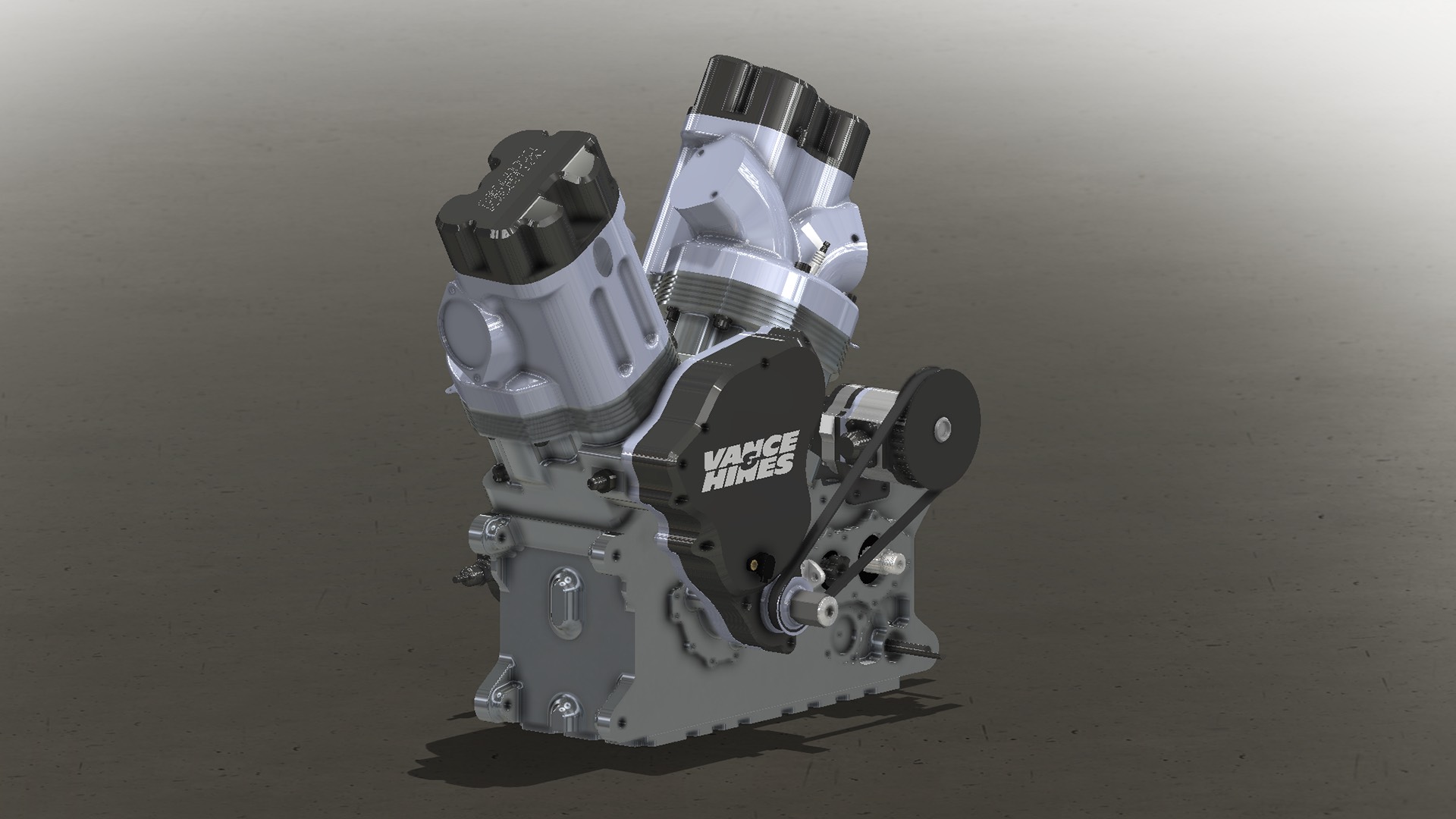 The engine will be sold as a complete, running engine or components may be ordered through the Vance & Hines RDC as well. Some teams are expected to purchase a builder’s kit, which allows a racing team to take advantage of Vance & Hines proven technology while incorporating their own cams and cylinder head porting specs to create a powerplant that works best for their team.

“This is a natural extension of our company’s involvement in motorcycle drag racing,” said Mike Kennedy, president of Vance & Hines. “Terry Vance and Byron Hines became legends in the NHRA with their history of winning. As we have for the past 40 years, we continue to support teams by providing great vehicles, great engines and great components.”

Vance & Hines launched a four-valve Suzuki-based racing engine earlier this year which can be used in several drag racing classes. In its first outing at the NHRA Gatornationals race in Florida, Vance & Hines rider Angelle Sampey hit 200 MPH in her second run and was the #1 PSM qualifier at the event.

The VH160VT engine will be available starting on June 1, 2021 through the Vance & Hines Racing Development Center.

About Vance & Hines and the VH160VT Engine

Please contact Eddie Krawiec at ekrawiec@vanceandhines.com for product details and further information about the VH160VT engine.

The Vance & Hines brand has always been about enhancing the exhilaration of the motorcycle ride. It started over 40 years ago, when Terry Vance and Byron Hines were two young enthusiasts in the fledgling Southern California motorcycle drag race scene. Terry always wanted to go faster and Byron knew how to make that happen. In short order, their on-track success and innovation drew the attention of other racers, riders and motorcycle manufacturers, which ultimately translated to commercial demand for their products and services. Today, the Company’s mission and activity is the same; make bikes go faster on the racetrack and take those learnings to make impactful products for riders around the world. Since the Company’s inception in 1979, it has run factory race programs in partnership with Suzuki, Yamaha, Ducati and Harley-Davidson in drag racing, road racing and flat track. Vance & Hines is based in Santa Fe Springs, CA and has its Racing Development Center in Brownsburg, IN. Learn more about the company’s history and products at www.vanceandhines.com.