EUROPE – January 21, 2020 – (Motor Sports NewsWire) –  Indian Motorcycle is reinforcing its investment in the growth of European motorcycle sport with the Dirt Track Riders Association (DTRA) and are pleased to announce the race schedule for the 2020 Indian Motorcycle European Flat Track Series.

Following a successful inaugural series in 2019, Indian Motorcycle has worked with the DTRA to select events that embrace the spirit of Flat Track racing’s growing scene across Europe, ensuring that the ‘Indian Motorcycle Flat Track Series’ championship is accessible and exciting for a wide range of rider abilities. 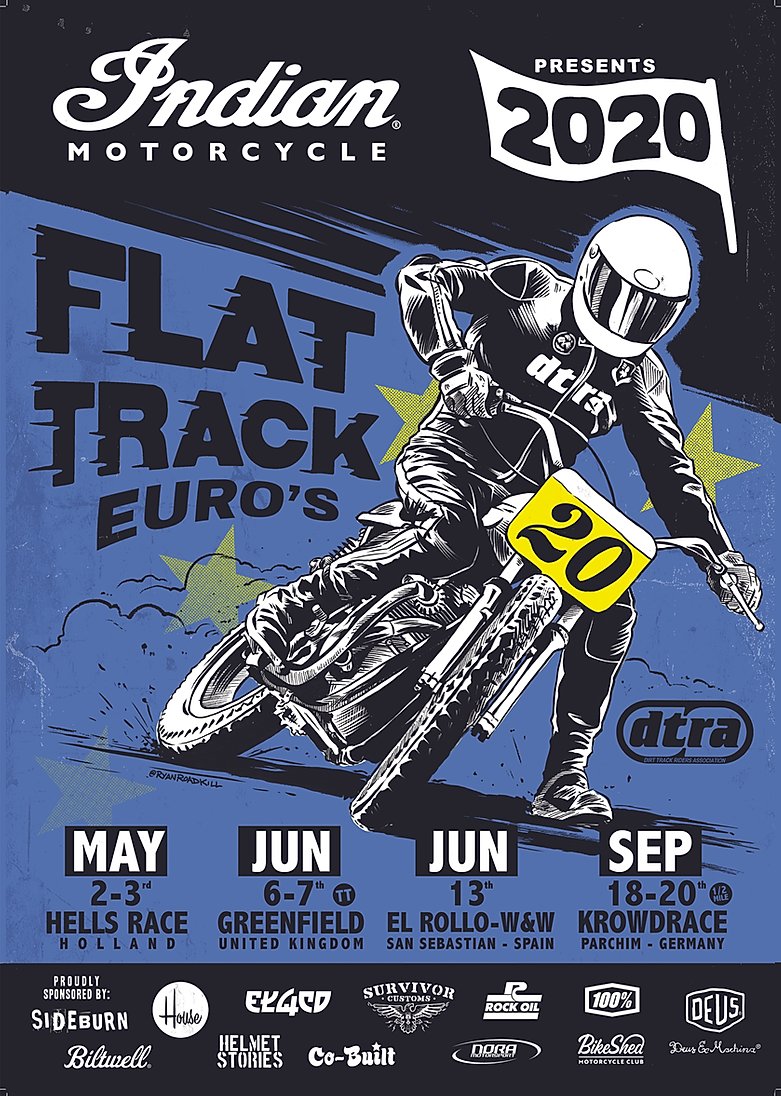 Three hugely popular classes will allow entries ranging from the thundering 750cc+ multi-cylinder ‘Hooligan’ road-based machines, such as Indian FTR 1200 and Scout, to the Open-entry ‘Pro Class’ dominated by lightweight DTX based machines and a growing Pre-1975 ‘Vintage Class’.

All classes cater for first-time amateur and Pro riders alike, with circuits catering for mixed ability, including fast ½-miles, tight short tracks and a TT, the championship series will showcase some of the best races in Europe, to promote the European Flat Track scene and its riders on a global scale.

Round 1: 2nd-3rd May Hells Race, Holland – Light Shale Short-Track – Open to all Classes. Held at this well-established event at the Dirttrack Lelystad Stadium, this is a fantastic event to open the series.

Round 4: 18th-20th September Krowdrace, Parchim Germany – Shale 1/2 Mile – Open to all Classes. Run for the first time in 2019, Krowdrace is expanding in its second year and will be running at this excellent ½-mile venue.

Rider Registration: The series is free to enter so even if you won’t make all the rounds it still worth getting your registration in; you never know you, may end up doing better than you think!

Prizes and benefits will be available only to registered riders. Registered riders will agree to abide by the rules of the series and the local rules and licence arrangements of each local race organisers. Registrations will open during January and close just before the first meeting. Full rules for the 2020 series will be found on the DTRA website and, of course, locally at each event. (Link to registration via DTRA: www.dirttrackriders.co.uk)

Indian Motorcycle will announce its 2020 team and rider lineup in a future release.

The Dirt Track Riders Association (DTRA) is run by riders and racers to promote European Flat Track racing. The series has grown year on year and is gaining popularity with riders from all disciplines of motorcycle sport from Rookie riders to Pro racers. Racing classes mean racing is open to many different levels of riders and types of bike. The DTRA has been instrumental in growing all forms of Dirt Track Racing outside of the USA and the DTRA supported ‘Indian Motorcycle Flat Track Series’ has grown to become the largest amateur championship outside of North America. To find out more visit www.dirttrackriders.co.uk

Indian Motorcycle is America’s first motorcycle company. Founded in 1901, Indian Motorcycle has won the hearts of motorcyclists around the world and earned distinction as one of America’s most legendary and iconic brands through unrivalled racing dominance, engineering prowess and countless innovations and industry firsts. Today that heritage and passion is reignited under new brand stewardship. To learn more, please visit www.indianmotorcycle-intl.eu/select-country/