Anderson will be the first to admit the start to his Mello Yello Countdown to the Championship has not gone as planned in his Summit Racing Equipment Chevrolet Camaro, as the veteran has just one round win through the first two playoff races. It’s dropped him to seventh in points, 107 behind teammate and points leader Jason Line, but good news for Anderson is he usually rises up when the pressure is on, and he’s always felt good racing in Charlotte, the home track for KB Racing. 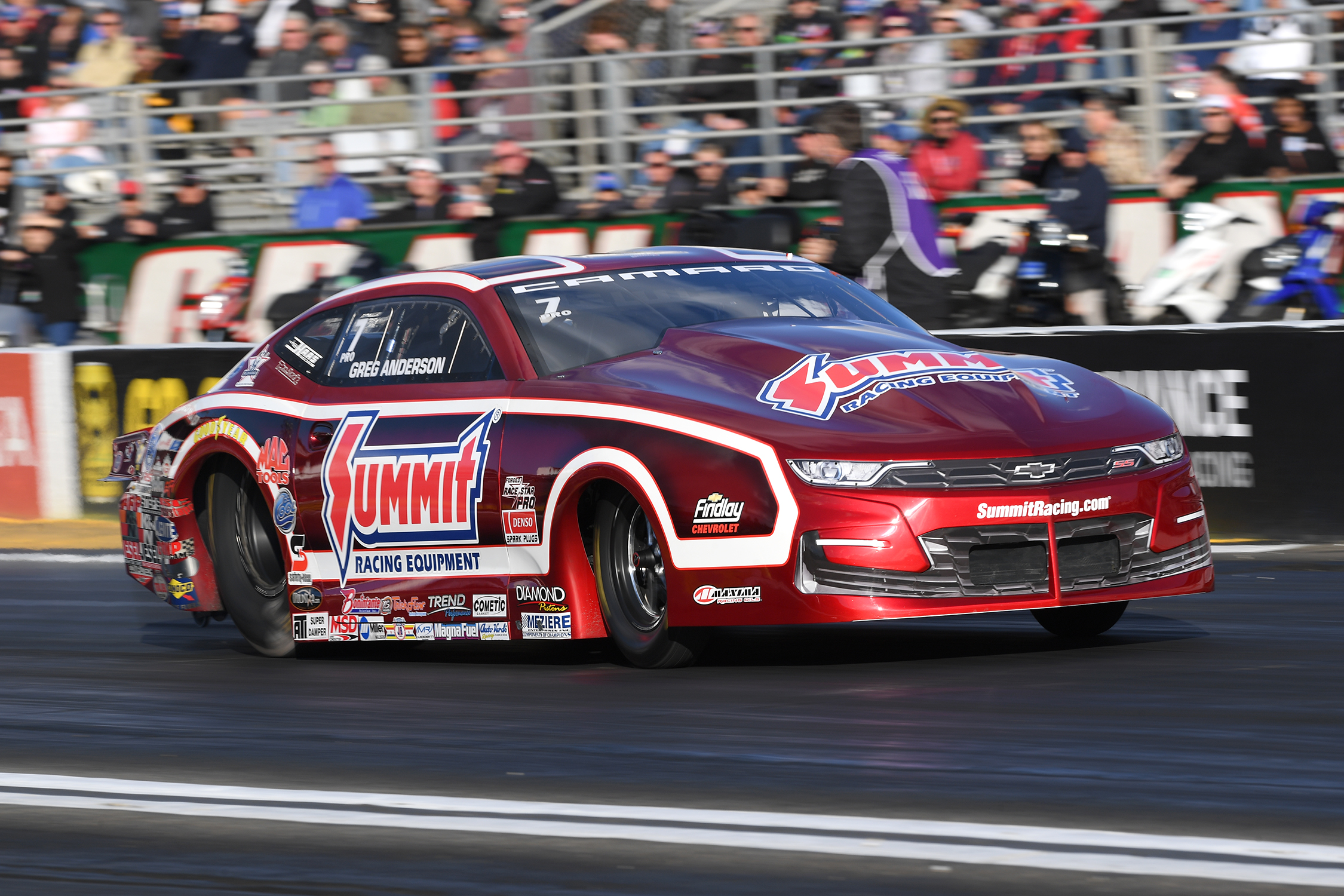 “This race is probably the cutoff point for me and we’ve got to make it happen this weekend,” Anderson said. “We definitely got off to a bad start to open the Countdown and we got ourselves in a hole. We’ve got to make some hay and there’s a lot of pressure this weekend, but it seems like we sometimes need that extra drive or motivation to push us. Hopefully that wakes me up this weekend because we certainly can’t wait any longer.”

Steve Torrence (Top Fuel), Ron Capps (Funny Car), Jason Line (Pro Stock) and Matt Smith (Pro Stock Motorcycle) were last year’s winners of the event that will be televised on FOX Sports 1 (FS1), including live final eliminations coverage starting at 2:00 p.m. (ET) on Sunday, Oct. 13. It is the third of six races in the Mello Yello Countdown to the Championship, and the 15th of 18 races during the 2019 Pro Stock season. It’s also the first time the Pro Stock class will race in Charlotte this year, as their new 18-race schedule didn’t include the four-wide race in the spring.

That means even more motivation for Anderson, who has three career wins at the Bellagio of dragstrips. His teammate, Line, won the fall race at the track last year, which only adds to the confidence level of the KB Racing team heading into Charlotte. Anderson, who has 93 career wins in the class, hopes that drives him to be at this best during a critical race weekend.

“This is the home track for us, we know this place well and we’re itching to get out there,” Anderson said. “We probably have the most laps of anybody at this track. Bottom line, we have no excuses going into the weekend. We should be able to do well, we just have to execute. My car has been finicky and I haven’t done a great job driving, either. We’ve been an easy out the first two races of the Countdown and we cannot be that this coming weekend.”

Anderson could turn things around in a hurry, much like he did earlier this year when he posted back-to-back wins in Denver and Sonoma. He’s hoping for another hot streak at an important time, but he’ll have to go through the likes of Line, St. Louis winner Erica Enders, who is just 11 points out of first, KB Racing teammate Bo Butner, who is 22 points out of first, Matt Hartford, Indy winner Alex Laughlin and Jeg Coughlin Jr. The difference between winning and losing continues to be razor-thin in the class, and that’s just the way Anderson likes it, especially in his current situation.

“I said this when we started the Countdown that of all the cars in it, you couldn’t really pick one favorite,” Anderson said. “The field is just so deep and any one of us could string together wins. Anybody can knock out anybody and that’s what you need in my case. In that regard, it’s the perfect scenario and hopefully we can get hot. The stakes are high right now and you just can’t make mistakes. That’s the way it should be and it’s pretty doggone cool to be part of.”

Torrence has ruled zMAX Dragway of late, as the defending Top Fuel world champ won both races at the facility a year ago and grabbed a victory at the spring race this year. He’ll look for another Charlotte sweep against the likes of points leader Doug Kalitta, Brittany Force and Leah Pritchett.

Capps is after his first Funny Car win of the Countdown as he attempts to track down points leader Robert Hight. Others to watch include Reading winner and Don Schumacher Racing teammate Jack Beckman, defending world champ J.R. Todd, John Force and Shawn Langdon.

The NTK NHRA Carolina Nationals will also feature thrilling competition in the E3 Spark Plugs NHRA Pro Mod Drag Racing Series presented by J&A Service, which will have its 11th of 12 races in 2019. Rick Hord is the defending event winner, while defending world champ Mike Janis won at Charlotte in the spring. Stevie “Fast” Jackson is the current points leader as he seeks his first world title. The event also includes the NHRA Lucas Oil Drag Racing Series, where the future stars of the sport earn their racing stripes.

After nitro qualifying on Friday, stick around to watch Nitromike, the entertaining P.T. Cruiser Wheelstander. The weekend will also include the top eight Drag Week winners in the Street Car Small Block Power Adder category, as those standouts will race in a special exhibition in Charlotte.

NHRA fans can take part in the Mello Yello Walking Tour to see the cars and teams hard at work in the pits. Fans can also attend Pro Stock School and Nitro School to learn how the cars operate and reach their thrilling speeds. zMAX Dragway will also host a Mello Yello autograph session and allow fans to meet their favorite drivers as well as the Sealmaster Track Walk hosted by NHRA announcer Joe Castello. Another can’t-miss experience is the winner’s circle celebration on Sunday after racing concludes. NHRA fans are invited to congratulate the winners of the event as they celebrate their victories.

To purchase general-admission or reserved seats, call 800-455-FANS (3267). Tickets also are available online at www.zmaxdragway.com. Kids 13 and under are free with a paid adult. To honor the Salute to First Responders, military and first responders can save 20 percent on tickets at the gate. For more information about the NHRA visit www.NHRA.com.

KENT, WA – August 2, 2018 – (Motor Sports Newswire) – It has been a banner 2018 NHRA Mello Yello Drag Racing Series season for Erica Enders, who has recorded six final round appearances over […]

CONCORD, NC – April 25, 2018 – (Motor Sports Newswire) –  There is a thin margin between success and an early exit during the 2018 NHRA Mello Yello Drag Racing Series season in Pro Stock […]

READING, PA – September 12, 2019 – (Motor Sports NewsWire) –  Andrew Hines and Bo Butner are in similar situations heading into the Mello Yello Countdown to the Championship, as both have been the points […]