Bauman’s fifth win of the 2019 American Flat Track season earned him a bit of breathing space in the AFT Twins presented by Vance & Hines championship hunt as time is running out for multi-time defending champion Jared Mees (No. 1 Indian Motorcycle/Progressive Insurance FTR750) in his bid to make it three straight.

Bauman and Mees clashed in an early-lap dogfight that teased a race-long showdown between the two title contenders. However, Bauman was simply too strong for Mees on this night, powering away from his rival just six laps into the 25-lap Main.

Bauman couldn’t exhale quite that early, however. Rookie revelation Brandon Price (No. 192 Roof Systems of Dallas TX/DPC Racing Indian FTR750) rolled by the champ and set his sights on Bauman for the lead on lap 7.

Mees was knocked off the podium entirely when Davis Fisher (No. 67 Bob Lanphere Beaverton Motorcycles/Dick Wall 60 Indian FTR750) made his way into third. Mees attempted a last-corner maneuver to steal back the position — and some critical points in the process — but came up just short.

As a result, Bauman extended his title advantage to 35 points (305-270) and is well poised to clinch his first AFT Twins championship a round early at the Indian Motorcycle Minnesota Mile presented by Law Tigers on September 21.

“The success tonight comes from the team,” Bauman said. “They’ve done everything for me, and the bike has been so good. I was nervous in the pits earlier, and they got my spirits up. Bronson has been struggling, but he came up to me and said, ‘dude, you’re the baddest guy here — just go out and get it.’

“I have such a good support group. My family has been at all the rounds and all the fans and my friends… I come to the racetrack to see my family and I race while I’m here. I can’t thank everyone enough for being here.”

Gauthier and reigning champion Dan Bromley (No. 1 Red Bull KTM Factory Racing 450 SX-F) went back and forth over the race’s opening half, throwing big moves as they tussled for the lead. Gauthier ultimately outlasted the spirited effort of Bromley to shake free on lap 7 and never looked back.

Bromley had other worries beyond Gauthier’s class-leading fourth victory. He was first dropped to third by a confident Morgen Mischler (No. 69 Waters Autobody Racing/D&D Powersports KTM 450 SX-F) and then lost out in a last-lap battle with charging Englishman Oliver Brindley (No. 24 Roof Systems of Dallas/FX Solutions Yamaha YZ450F) for the final spot on the podium.

After the race, home-state hero Gauthier said, “Dan was running it on the inside of me pretty much every turn in those first couple of laps, and I’d dive right back inside on him and make it happen. I kind of outsmarted him, I think. He’s making it tough to win this championship, but I think we’ve got the upper hand right now. My riding has been awesome lately. I’ve just been having fun, and that’s the main thing for me to be fast and smooth.”

Varnes sprinted away to the holeshot with polesitter Dalton Gauthier (No. 122 Black Hills Harley-Davidson XG750R Rev X) in tight formation. Gauthier dove up the inside of Varnes entering Turn 3 on lap 2. Varnes immediately countered, squaring Gauthier back up and retaking the lead a short straight later.

Varnes continually solidified his advantage from there; he never offered the talented Gauthier a second opportunity for a strike and managed to break his challenge over the race’s final five laps.

Title leader Cory Texter (No. 65 G&G Racing/Holeshot Powersports Yamaha MT-07) closed down on Gauthier late, but simply ran out of laps. He finished 0.412 back of Gauthier in third to complete an all-Pennsylvania podium.

Varnes’ second win of the season catapults him into second in the championship standings and pulls him to within 16 points of Texter (165-149) with two rounds remaining.

After the race, Varnes said, “In the semi, I couldn’t really hold the corners and we made a last-minute change before the Main Event hoping that it would help, and it definitely did.

“I’m just stoked to do it in Williams Grove and PA. It was only like an hour-and-a-half to get here today and I was able to sleep in my own bed last night, so that was pretty cool. It’s great to see all my family and friends out here too and do this in front of them. It’s awesome.”

Catch the feature broadcast of the Williams Grove Half-Mile presented by Appalachian Harley-Davidson on NBCSN with flag-to-flag coverage of the Main Events, enhanced by exclusive features and cutting-edge aerial drone and onboard footage. The broadcast will debut on Saturday, September 21, at 3:30 p.m. ET/12:30 p.m. PT and will re-air on Tuesday, September 24, at 4:00 p.m. ET/1:00 p.m. PT.

American Flat Track will next travel to Minneapolis, Minn., for the penultimate round of the 2019 season, the Indian Motorcycle Minnesota Mile presented by Law Tigers, at Canterbury Park on September 21. FansChoice.tv will live stream the entire day’s activities once practice starts at 12:30 p.m. ET/9:30 a.m. PT. Tickets are on sale now at tickets.americanflattrack.com.

To get the latest American Flat Track clothing and merchandise visit www.americanflattracker.com.

American Flat Track is the world’s premier dirt track motorcycle racing series and one of the longest-running championships in the history of motorsports. Sanctioned by AMA Pro Racing in Daytona Beach, Fla., the series is highly regarded as the most competitive form of dirt track motorcycle racing on the globe. For more information on American Flat Track, please visit  http://www.americanflattrack.com, like us on Facebook, follow us on Twitter, check us out on Instagram, live stream the events at FansChoice.tv and catch all the American Flat Track racing action on NBCSN.

DAYTONA BEACH, FL – April 23, 2019 – (Motor Sports Newswire) –  The 2019 American Flat Track title contenders will jump right back into the fight this weekend as the series arrives at Wild Horse […] 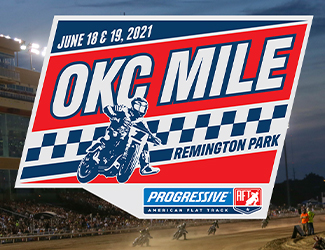