BIRMINGHAM, AL – September 22, 2018 – (Motor Sports Newswire) –  Yoshimura Suzuki’s Toni Elias may not have successfully defended his MotoAmerica Superbike title, but he’s hell-bent on making sure he ends up with the most victories. On a sunny and hot Saturday at Barber Motorsports Park, Elias took one step towards that as he won his eighth race of the year, a win that moves him into a tie with newly crowned champion Cameron Beaubier. The two now have eight victories apiece heading into tomorrow’s season finale in the Championship of Alabama.

While Elias was able to win his eighth race of the year, his rival Beaubier was down and out, the three-time MotoAmerica Superbike Champion crashing out of what was a three-way fight for victory on the 14th of 21 laps. Bruised and beaten, Beaubier will be back on the Monster Energy/Yamalube/Yamaha Factory Racing YZF-R1 tomorrow to try and win his ninth race of his championship season.

“Of course,” Elias said when asked if his goal was to win the most races. “That’s why my mind was in the championship in the second position, but my goal when I arrive here is win more races than Cameron (Beaubier). I’m not going to have the number one because the championship is long (gone) and I did many mistakes, but I will try to go home in that way.”

The win was not only Elias’ eighth of the season, but it was the 24th of his MotoAmerica career.

“After the mistake in Pittsburgh, I was a little bit worried about it because this guy’s fast in wet, he’s fast in dry,” Elias said of Herrin. “So, my second place in the championship was not safe. One part of my mind was on that, and another part was on trying to win this race. I really wanted to. We worked so good yesterday. New setup works perfectly for this tire and this heat. We found something like we didn’t find before. I was pretty confident. Finally, the result confirms what we found. At the beginning from seventh position, I had some troubles. I did some mistakes trying to overtake some riders. I was risking too much. I had false neutrals. It was pretty difficult at the end. At the beginning, I calmed down a little bit, step by step, taking confidence, overtake some riders. Then I catch Josh (Herrin). He was so strong. The more laps we had was a little bit more easy for me, and at the end we could win this race. He was pretty beat up, so congratulations for the second place and also for Mathew’s (Scholtz) podium. Tomorrow let’s try to finish this championship if it’s possible with another win. Yamaha guys will be a little bit more tough. They used the green tires, but when we saw before the race they used reds it was like, ‘wow, this is a big mistake.’ I knew that from Friday it was impossible. After five laps was so soft, and the green tire was the right choice.”

Second place on Saturday went to early race leader Josh Herrin on the Attack Performance/Herrin Compound Yamaha, the Georgian dropping out of the lead and 7.3 seconds behind Elias at the finish after his back issue from the WeatherTech Raceway Laguna Seca round reared its ugly head.

“Yeah, I think I had to kind of go off at Laguna,” Herrin said of his back pain. “It’s my lower back. Just with the amount of riding that we were doing and all the stuff that I was having to put my back through that weekend. It’s been fine all year, and then here I think because of the long rights and having to manage the tire and kind of move your body in a different way… it just kind of flared up today. I just didn’t want to make it any worse. I saw that I had a big gap to second, and I knew that I wasn’t going to be able to keep up with Toni (Elias). So I just kind of tried to keep up with him as much as I could without making it any worse. Luckily, we were able to hold onto second. It’s a bummer because I think tomorrow the Graves guys are going to smart up a little bit and run the green tires, so today was a good opportunity to get out and beat down on them a little bit. So, tomorrow will be tougher, but I’ll be more prepared for tomorrow’s race. Hopefully, we can battle for a win, so we can end the season strong.”

Yamalube/Westby Racing’s Mathew Scholtz finished third, the South African coming out on top of his battle with Yoshimura Suzuki’s Roger Hayden after the two came together in the closing laps. It was Scholtz’ eighth podium of the season.

“I wouldn’t say tough,” Scholtz said. “He followed me in and passed me on the second last lap. His bike is the fastest bike again. I came from so far back. There was nothing else that I could really do. I made a move. It was hard, but none of us crashed. I’m sorry that he got pushed wide. I finished third and I’m just thankful to be able to race with you guys. Thank you to everyone that has supported me.”

Hayden held on for fourth, some two seconds behind Scholtz and 1.2 seconds ahead of fellow Kentuckian Jake Lewis on the M4 ECSTAR Suzuki.

Supersport – Gillim Wins – In The Dry!

In Supersport, Rickdiculous Racing’s Hayden Gillim, who has been developing somewhat of a reputation as a “rain rider” this season, with his two previous wins occurring in wet weather, showed his prowess on a dry track when he got the victory over Monster Energy/Yamaha Extended Service/Graves/Yamaha’s JD Beach, who finished second in Saturday’s race after already clinching the class championship in New Jersey. M4 ECSTAR Suzuki rider Valentin Debise returned to form after recovering from his crash in Pittsburgh two rounds ago, and he finished third.

“It’s really good to get a win in the dry,” Gillim said. “It’s been, like, five years. So, it’s really good to get back up here, and to have to earn it. It’s incredible. We had a really good race. The red flags were obviously a little weird. I was concerned about that because, going full pace and then stopping, going full pace, stopping, going full pace, stopping. I wasn’t sure how I was going to do on that. Then I was worried about my clutch a little bit. I know I’ve had some issues there doing the starts. So, three starts on one clutch and it wasn’t acting up. It was really good. The whole Rickdiculous team gave me a really good bike this year, and especially this weekend. I felt good. We’ve got some stuff to work on. It’s going to be another great race tomorrow.”

In Liqui Moly Junior Cup, Alex Dumas, who clinched the 2018 class championship at New Jersey, led from the pole and, despite the race being red-flagged twice, the KTM Orange Brigade/JP43 Training rider notched his ninth victory of the season with another dominant performance where he was never headed. MP13 Racing’s Cory Ventura finished second aboard his Yamaha, while Quarterley Racing’s Renzo Ferreira finished third aboard his Kawasaki to complete the balanced, three-brand podium.

“I got pole this morning and I was really happy about it,” Dumas said. “I just wanted to have a good start, which I did. Unfortunately, Ashton (Yates) crashed in the first lap. I had a one-row gap on the other guys for the start, so I took advantage of that and got a good start. I tried my best to put my head down and do some fast laps. The track was really slick. It’s hard, mentally, to ride on it, but I’m really happy about the race. I hope to win tomorrow again.”

In the Twins Cup class, Saturday’s race was the final one of the 2018 season, and it decided the championship between Ghetto Customs Suzuki rider Chris Parrish and Syndicate/AP MotoArts Yamaha’s Jason Madama. The two riders were separated by just two points going into the finale and Parrish finished eighth, while Madama finished ninth. The outcome was that Parrish won the title by a scant three points. Meanwhile, back at the race, Robert McLendon III was the victor aboard his Altus Motorsports Yamaha in his first-ever MotoAmerica race; Turner’s Cycle Racing’s Kris Turner was second on his Suzuki; and RBoM 180 Racing’s Curtis Murray was third on another Suzuki.

“It was an absolutely awesome race,” McLendon said. “First time on the bike, first time with that team. Hats off to these guys right here. We went and got a brand-spanking-new bike for me. This is like my home track. I’ve got four kids and I can still say that’s the most fun you can have with your clothes on, ever. The race itself was pretty awesome. I wanted to get a good start and try and check out, but I knew that wasn’t going to happen. Kris (Turner) rode awesome. I was saving that move for the last lap. I’m so glad you did the same exact thing, man, because I was giggling. I saw I was getting side by side. I was like, ‘well, I got the inside. So it’s about to be really, really awesome. There’s going to be a bunch of parts laying on the gravel track because I’m going for it.’ ” 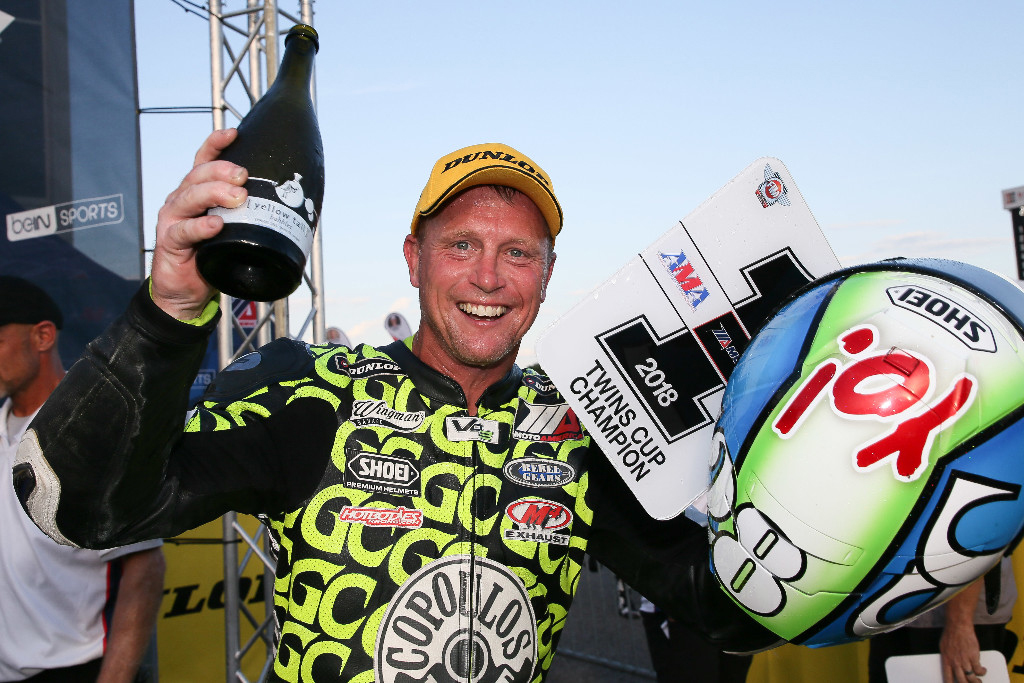