Gonzalez ran a 5.743-second pass at 254.09 mph in his Chevrolet Q80 Camaro to take down Steve Jackson, Rickie Smith and Brandon Snider in the final round. Gonzalez became the first Domincan-born driver to earn a victory at an NHRA national event with his triumph in Charlotte.

“My team gave me a tremendous car all week long and we figured out how to respond as the weather got warmer and our car continued to improve,” Gonzalez said. “This car has been running amazingly so far, so I’m happy for my car and my crew to get this victory.”

After a first round exit in Gainesville, Gonzalez notched his first No. 1 qualifier in Houston before being eliminated in the quarterfinals. He leaves Charlotte fourth in the points standings, as Smith and Jackson currently lead the class through three events. 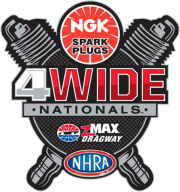 NORWALK, OH – June 20, 2018 – (Motor Sports Newswire) –  Never one to shy away from a challenge, first-year Funny Car driver Shawn Langdon has a big one in front of him heading to […]

GAINESVILLE, FL – March 14, 2019 – (Motor Sports Newswire) –  A brand new car and a special throwback scheme already will make this weekend a special one for Jeg Coughlin Jr. Add in a […]